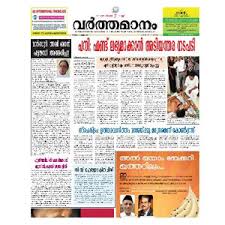 About Newspaper:Varthamanam epaper is a Malayalam daily newspaper published from Calicut, Cochin, and Doha by Media View Limited.

Editions :Calicut, Cochin, and Doha
Language :Malayalam
Epaper URL :http://www.varthamanamepaper.com/
Website URL :http://www.varthamanamepaper.com/
Country :India
Varthamanam is a Malayalam daily published from Kozhikode, Kochi, andDoha by Varthamanam Ventures Pvt Ltd. Malayalam critic and orator Sukumar Azhikode was the founding chief editor of the newspaper. Mujeeburahman Kinaloor is the editor in charge of Varthamanam. Varthamanam as a newspaper uplifting humanity and morality of Muslim reformation movement of Kerala.It is quite natural that every reformist activities will have to face challenges.This venture has also had its detractors all through its journey from within and outside.However the daily has been keeping its high values in reporting and editorial.Even the media faced financial crisis in some months its management and editorial made no compromises in keeping its values.
The advent of Varthamanam sent ripples in the Malayalam Corporate News Industry circle in Kerala.To get through the onslaught, Corporate News Industry resorted to making the readers play games for months together, so the temptation of the new entrant not pose a threat to it.It was a fact that Varthamanam did not keep up its expectations due to its internal bickering.Now it is in its revival path with austerity measures. Certainly it has a space and goal.Asifali Kannur, MD and Associate Editor is confident of steering the newspaper to face the new challenges.