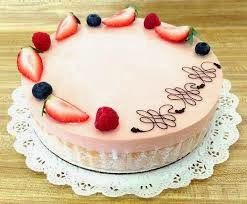 For the cake layers:


For the white chocolate frosting:


Prepare the lemon curd, following this recipe, but use only 1/2 cup of sugar. Cover lemon curd with plastic wrap and chill.
Make the cake layers: Preheat the oven to 350 degrees. Line the bottoms of 2 9-inch cake pans with circles of wax paper.
In a large mixing bowl, whisk the egg yolks with 1/2 cup of sugar until they become pale yellow and thick. Drizzle a spoonful of the mixture over the rest of the mixture in the bowl and it should be thick enough to form a ribbon for several seconds before dissolving back into the batter.Sift the flour together with the salt. Place the egg whites in the bowl of a standing mixer and beat until soft peaks form. Gradually add the remaining 1/2 cup of sugar and beat until stiff peaks form. Gently fold 1/3 of the egg whites into the egg yolk mixture. Gently fold in 1/2 of the flour until just incorporated. Fold in another 1/3 of the egg whites and the vanilla, then the remaining flour, trying not to deflate the batter. Gently fold in the remaining egg whites.Divide the batter between the two pans and gently level the batter with a knife.Bake cakes until golden brown and until center springs back lightly when touched, about 25-30 minutes. Remove from oven and let cool in pans.While cakes are baking, prepare frosting: Chop the white chocolate and place it in a bowl over a saucepan containing an inch of simmering water. Do not let the boiling water come in contact with the bottom of the bowl. Stir the chocolate occasionally until it melts, then remove from heat. Avoid getting any water into the melted chocolate. Stir Place softened butter, cream cheese, vanilla, raspberry or lemon extract if using, and pinch of salt in the bowl of a standing mixture. Beat mixture until light and creamy. Add the melted white chocolate and cream and mix well.
Beat in the powdered sugar 1 cup at a time, continuing to beat until mixture is light and fluffy. If frosting is too stiff, add a bit more cream or milk. If mixture is too soft, add more powdered sugar.
Place the guava jelly or guava paste in a medium saucepan. Add about 1/2 cup of water and heat over low heat, until mixture just comes to a simmer. Add more water if necessary - mixture should be the consistency of a syrup. Remove from heat and stir in creme of casses, if using.
Assemble the cake: Remove cake layers from the pans. Slice each layer in half horizontally, to make 4 thin cake layers. Use a pastry brush to brush the guava syrup onto the cut side of each cake layer, letting the syrup soak into the cake. Divide all of the syrup among the 4 layers.
Place one cake layer, cut side up, on a serving plate. Spread 1/2 of the lemon curd over the cake, then top with another cake layer, cut side down. Spread a generous portion of the white chocolate frosting over the cake, then top with another cake layer, cut side up. Spread the remaining lemon curd over the cake, then top with the remaining cake layer, cut side down. Frost sides and top of cake with remaining frosting. Decorate as desired, garnish with strawberries and white chocolate curls.

Heart Health,Healthy Brain Function,Cancer prevention, anti-aging, and increase body resistance,Healthy Skin,Sources of vitamin B complex.
Guava is a great source of Anti oxidant in spite of orange, plump, banana, grapes and apples. It also has a high content of vitamin C. Even a 100 grams Guava contains four times more vitamin C than an Orange. Vitamin C is such a powerful Anti oxidant, which increases the immunity power to fight with cancer or even heart problems. An unripe guava has more vitamin C than a ripped and soft guava. A lemon has ten times less vitamin A such as a guava have. A Guava is more nutrition than other fruits.
Thanks for Visiting womenspage.in