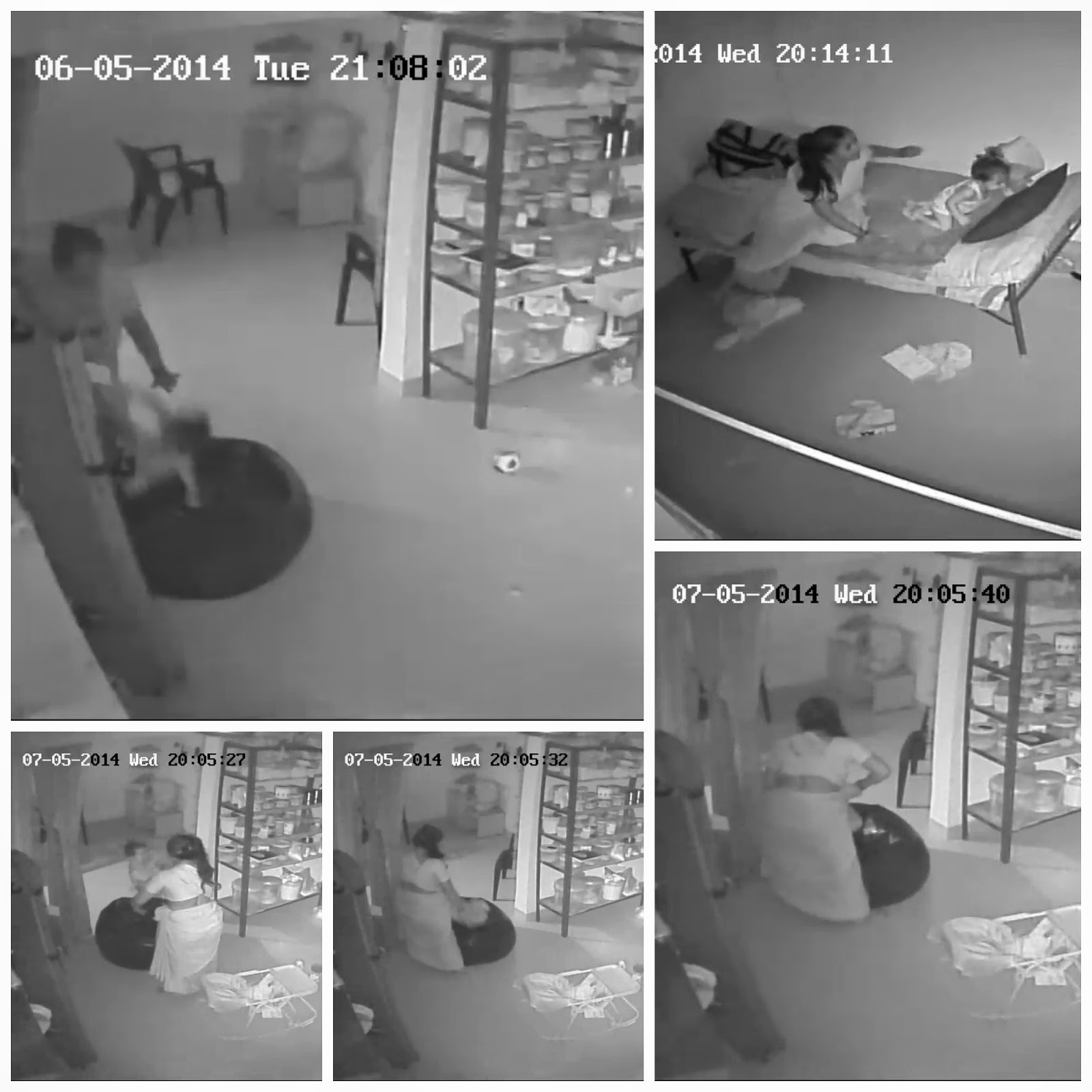 Snapshots of the cctv footage showing the maid switching off the light and then throwing the baby onto a bean bag and then beating it on the bed.

Working parents these days have a lot to worry about. And after this shocking incident, you don't just need to protect kids from strangers outside, but also from those you let indoors. This techie couple hired a motherly governess for their 11-month-old child, as both worked night shifts. Little did they know that this mother of four and grandmother of two had anger management issues and violent tendencies.


The 11-month-old boy Hemishkumar alias Happy, is still in trauma after being allegedly physical beat repeatedly by his care-taker for last two days. The incident had came to light, after the parent reviewed the CCTV cameras instaled in in their house via their mobile phone.

Happy's parents, T Vasanta (31) and T Navinkumar (31), from Garandeur society in Ambegoan approached the Dattawadi police station on May 8 to file a complaint against Baby Laxman Patole (42), a resident of Ramtekdi, Hadapsar. Patole's was referred by Plus Solution Placements Services Nursing bureau. Until Tuesday evening, the police has filed an accordance report, and are yet to finalise whether the act must be treated as cognisable offence or non-cognisable one. The lady was arrested on Tuesday evening and has been booked under the section 23 of the Juvenile Justice Board.

T Vasanta said, "On May 8, around 4.30 am we reached home and securtinised the CCTV camera footage. We saw that the previous night, my son was being lifted like a toy and throw on bean bag over and over again. Patole had turned off the lights in the room, as she assumed that the CCTV camera will not be able to she her committing the dastardly act. Even in the card, we saw her slapping my sons and hitting him on his head. It broke my heart. Although I was seething in anger, i kept my calm and alerted my relatives and the police."
She went on, "We had instaled CCTV cameras in our house, to keep any eye on the caretaker. Initially the bureau gave us a senior citizen, and to keep an eye how she takes care of my child in my absence, I went out. Seeing the footage on my mobile handset, I noticed that the lady used to sleep and with her leg she try to move my child, so we approached the bureau and demanded another lady. She was replaced."

Happy's father Navinkumar said, "We were paying her Rs12,500, and my wife had given her our son daily time-table, with his eating and napping times. In our presence, she was well behaved. But on May 7, whwe left for work, leaving the child in her custody. Around 8 pm, my wife decided to keep a check on the child's well-being. But he net-connectivity was throwing issues . She noticed all rooms were dark, and the child is crying. She immediately called the caretaker on the landline, but the lady claimed the child was asleep."

He added, "We reached home and checked the CCTV camera footage in our room. We even saw the recording of May 6. My son was being repeatedly beaten by the lady. She kicked my son, slapped him, and even manhandled him."

Doctors who examined the child at Sassoon general hospital claimed that the child underwent various tests such as CT-scan, sonography and other tests. The child has red-blue marks on his hand and bumps on his head.

Anuradha Sahasrabuddhe, founder of Dnyana Devi Childline said, "There is a serious issues with the creches run in city and caretakers. One of them have proper licenses, or training to take care of children. This is not the first incident where a child has been manhandled by the caretakers, such offence are not reported. Its starts with pinching the child or beating him. Next, the child sports burn injuries from lighters or agarbatti. Parents should inspect the child body, and if unearth the reason when they cry of fear."

Senior lawyer Nandu Phadke said, "The act is dangerous and inhuman. Such cases need to be considered as a cognsible offence by the police."

The 11-month-old boy Hemishkumar alias Happy, is still in trauma after being allegedly physical beat repeatedly by his care-taker for last two days. The incident had came to light, after the parent reviewed the CCTV cameras instaled in in their house via their mobile phone.
Gold Rate Today
Silver Rate Today