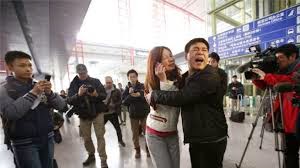 As multinational teams continued their search for the missing Malaysia Airlines Boeing 777 jetliner, a Malaysian government authority close to the investigation told. The Associated Press on Saturday that investigators are now convinced that one or more passengers on the flight with considerable flying know-how hijacked the aircraft.

The official, who spoke on condition of anonymity because he was not allowed to speak about the investigations, said the hijacker deactivated communication apparatuses and turned flight MH370 off-route, according to a report in USA Today.The hijacking was “conclusive” and not just an assumption, the official said.

US officials previously said two of the jetliner’s communication systems were deactivated separately just after the plane’s last transponder signal.The data-reporting system was turned off at 1:07 a.m. as the plane, which was en route to Beijing with 239 people on board, was on course an hour after taking off from Kuala Lumpur. The transponder, which broadcasts altitude and location information, was deactivated at 1:21 a.m.

The aircraft made radical changes in course and height after vanishing from the civilian radar, US officials said on Friday, according to a CNN report. This further corroborates that the flight was hijacked. The US officials also said the findings raise questions as to who was piloting the passenger jetliner that disappeared a week ago. The more the US finds out about the Boeing 777’s pattern,"the more difficult to write off" the thought that some kind of human interference was there, one of the authorities close to the probe said on Friday.

However, authorities would not confirm whether the systems were deactivated intentionally by someone in the cockpit or during a likely power breakdown in which different mechanisms stopped working one after the other.

Meanwhile, Indian search teams aboard ships and planes have spread out their search regions to the west of the Andaman and Nicobar Islands chain  hundreds of miles away from the intended course of the flight, said V.S.R. Murty, an Indian Coast Guard inspector-general.