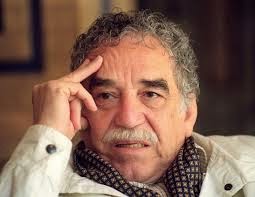 The Nobel  literary giant, considered to be one of the greatest Spanish-language authors of all time, had spent nine days in hospital with a lung and urinary tract infection this month.

A source close to his family confirmed his death. He had been recovering from pneumonia in his Mexico City home since 8 April and was reported to have been in a fragile condition.

Gabriel Garcia Marquez was Born in the small Colombian town of Aracataca, Gabriel Garcia Marquez won the Nobel Prize for literature in 1982 “for his novels and short stories, in which the fantastic and the realistic are combined in a richly composed world of imagination, reflecting a continent's life and conflicts,” according to the Nobel Prize website.


Nobel laureate Gabriel Garcia Marquez crafted intoxicating fiction from the fatalism, fantasy, cruelty and heroics of the world that set his mind churning as a child growing up on Colombia’s Caribbean coast.

The Colombian author of One Hundred Years of Solitude was diagnosed with lymphatic cancer about 12 years ago and battled it successfully before being diagnosed with Alzheimer's disease in 2006.

One of the most revered and influential writers of his generation, he brought Latin America’s charm and maddening contradictions to life in the minds of millions and became the best-known practitioner of “magical realism,” a blending of fantastic elements into portrayals of daily life that made the extraordinary seem almost routine.

In his works, clouds of yellow butterflies precede a forbidden lover’s arrival. A heroic liberator of nations dies alone, destitute and far from home. A Very Old Man With Enormous Wings, as one of his short stories is called, is spotted in a muddy courtyard.

Known to millions simply as ‘Gabo’, Garcia Marquez was widely seen as the Spanish language’s most popular writer since Miguel de Cervantes in the 17th century. His extraordinary literary celebrity spawned comparisons with Mark Twain and Charles Dickens.


With writers including Norman Mailer and Tom Wolfe, Garcia Marquez was also an early practitioner of the literary nonfiction that would become known as New Journalism. He became an elder statesman of Latin American journalism, with magisterial works of narrative non-fiction that included the Story of A Shipwrecked Sailor, the tale of a seaman lost on a life raft for 10 days. He was also a scion of the region’s left.

Shorter pieces dealt with subjects including Venezuela’s larger-than-life president, Hugo Chavez, while the book News of a Kidnapping vividly portrayed how cocaine traffickers led by Pablo Escobar had shred the social and moral fabric of his native Colombia, kidnapping members of its elite. In 1994, Garcia Marquez founded the Iberoamerican Foundation for New Journalism, which offers training and competitions to raise the standard of narrative and investigative journalism across Latin America.

But for so many inside and outside the region, it was his novels that became synonymous with Latin America itself.

He was feted before the press on his birthday last month by friends and well-wishers who brought him cake and flowers outside his home in an exclusive neighbourhood in the south of Mexico City. He did not speak at the event.
Thanks for Visiting womenspage.in