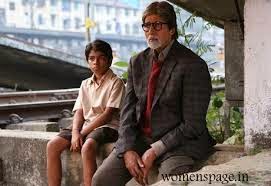 The horror comedy entertainer, which hit the screens on 11 April, minted ₹4.07 crore nett on the first day. However, the film witnessed significant growth on the second day (12 April) and minted ₹5.85 crore at the Indian box office. The two-day collections of the Bachchan starrer now stands at ₹9.92 crore.

Directed by Nitesh Tiwari, "Bhoothnath Returns" has Amitabh reprising the role of a ghost from the 2008 flick "Bhoothnath". The film's other cast members include child actor Parth Bhalerao, Boman Irani, Anurag Kashyap and Usha Nadkarni.

The horror comedy received mostly positive reviews from critics, which worked in the film's favour. Armed with a good word of mouth, "Bhoothnath Returns" is likely to perform well at the box office in the coming days. The film will easily surpass the opening weekend collections of "Queen," which amounts to ₹10 crore.
Thanks for Visiting womenspage.in