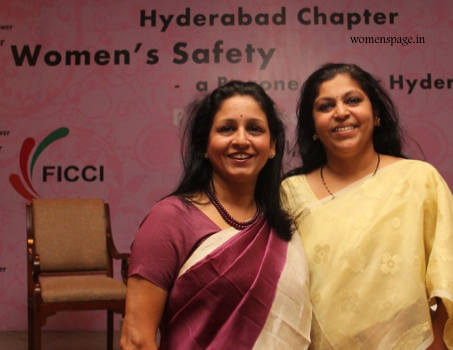 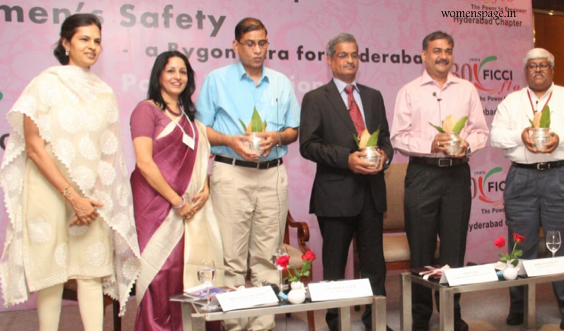 Hyderabad Chapter of FICCI Ladies Organisation (FLO), a national body with the prime objective of women empowerment though the promotion of entrepreneurship and managerial excellence launched 'Blue Print on Women's Safety', here at Hyderabad today. The 'Blue Print on Women's Safety' was launched at a special function in the presence of Dr. Faizan Mustafa, Vice Chancellor, National Academy of Legal Studies and Research (NALSAR), Mr. Amit Garg, IG, Vigilance and Enforcement Wing; Mr. V. Laxmikanth, M.D., Broadridge; past chairs along with office bearers of FLO Hyderabad chapter and others. The 'Blue Print on Women's Safety' offers recommendations and suggestions on women's safety which will be presented to the Government for implementation informed Ms. Jyotsna Angara, Chairperson, FLO Hyderabad Chapters.

Fast track courts to deal with all women abuse related cases, any two standard safety apps to be made mandatory on all employees’ phones across the organisations to ensure consistency, training emergency response and helpline teams to take immediate action, self defense workshops for women employees at regular frequency along with regular safety audits of workplaces and public spaces.

These are some of the key recommendations made by FICCI Ladies Organisation (FLO) on Monday as part of the “Blue Print on Women Safety.” A GPS based chip which can be implanted in a chain or bracelet that can be worn by women as mobile phones could be snatched in case of an emergency was also highlighted.

The city of Hyderabad was a safe abode at one time for women but not anymore. Disturbed and outraged at the recent happenings with regards to Women's Safety in the city of Hyderabad, FLO Hyderabad chapter scheduled a series of Round Table Meetings with CEOs and Heads of Organisations of various companies to arrive at a Blue Print for Women's Safety. Over 36 organisations participated in the meetings including Corporates, Chamber of Commerce; Academia and Govt, bodies.

Speaking at the launch of the Blue Print, Chairperson FLO Hyderabad Chapter Ms. Jyotsna Angara said that the status of Women in modern India seems quite a paradox. On one hand she has reached unattained heights of success in terms of profession, business, social status and education, while on the other she has become a vulnerable target of violence. Being a Victim of any form of crime or harassment could be most traumatic experience for any woman. Women's safety and wellbeing is today a national phenomenon and a matter of extreme concern too, she added.

Women safety does not seem to be of importance or priority.Though we do know that Public safety is the responsibility of the system and it is letting us down, we cannot be silent spectators and wait for the awakening to happen. We at FLO believe that, it's now time for the Civil Society to become stronger and take substantial amount of responsibility to better the situation for ourselves and hence this 'Blue Print on Women's Safety' which offers recommendations to Govt, and suggestions to Corporates and Business Houses as well as the general civil society at large, said Jyotsna.

Among the various recommendations given in the 'Blue Print on Women's Safety7 are Fast Track Courts to be established for all women abuse related cases, Cases of sexual harassment which are non-cognizable offences should have a time limit of maximum 45 days for completion of inquiry, etc. The Blue Print recommends increasing the presence of ALL Genders in Public Spheres. 33% presence of women is not incorporated as yet. Audit needs to be conducted across various industries verticals to assess the implementation at the earliest.

It also recommends Incentivizing the implementation, an incentive / deterrent based action may be taken against all organisations that do not comply with this requirement e.g. Higher Tax bracket for non-compliance. It also recommends that Cinema, Advertising and other such visual forms of communication be monitored by Govt, and other regulatory bodies to ensure that women are not commoditized in a derogatory manner as is often done in these mediums.

The Blue Print also recommends various actions to be taken such as improving basic infrastructure such as Street Lights, Footpaths, construction of toilets at all MMTS stations, creating PPP model for sustaining the maintenance of public spaces, increasing number of police patrolling and deployment of trained female police constables into local communities to lead implementation of the various initiatives. It also recommends identifying two Community leaders along with one Police woman to become "Change Ambassadors" of the community who can be major catalysts in changing mind-set of people.

For Corporates and Business Houses, the 'Blue Print on Women's Safet/ suggests training Emergency Response and Helpline teams to take immediate action; Any TWO Standard Safety Apps to be made mandatory on all employees' phones across the organisation to ensure consistency.

Also it has been noted that when a women is attached the phone is snatched away first, hence It would help if a GPS based Chip can be implanted in a chain or bracelet that can be worn by women. Self Defense workshops for all women employees at regular frequency are also suggested along with regular Safety Audits of workplaces and public spaces. The Blue Print also suggests Quarterly Audits to be conducted by external registered vendor or a common constituted committee by its chamber of commerce / NASSCOM among various other things.

In its suggestions for the civil society at large, the 'Blue Print on Women's Safety' advocates public awareness programs at schools, colleges, work place and community especially awareness raising presentations in schools, colleges and universities on issues of adolescence, domestic violence and child safety. Also it suggests lectures to include preventive measures that can be undertaken by children, especially adolescent girls, teachers and parents with regard to safety of women and children. The suggestions aim to change the mind-set of society toward women.
Thanks for Visiting womenspage.in