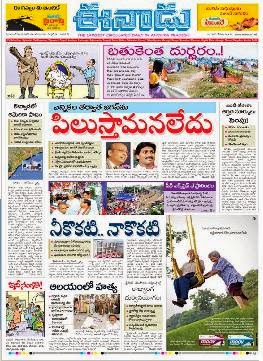 Eenadu is an Indian Telugu-language daily newspaper which is the largest circulated Telugu newspaper in Andhra Pradesh, India. According to the Indian Readership Survey (IRS) Q1 2012, Eenadu ranks No. 6 among the regional languages dailies with a Total Readership (TR) of 59,06,000. Eenadu (meaning "Today" in Telugu) was founded by the Indian media baron Ramoji Rao in 1974. It has also successfully adapted the latest publishing and communication technologies into the Telugu language. Eenadu's rapid expansion enabled diversification of its portfolio by venturing into numerous other markets such as finance and chitfund (Margadarsi chits), foods (Priya Foods), film production (Usha Kiran Films), film distribution (Mayuri Films), and a group of television channels (ETV). All the businesses are organized under Ramoji Group.

Initially, the circulation of Eenadu was limited. When launched in the city of Vishakapatnam, it wasn't able to sell more than 3,000 copies a week. Eenadu found itself struggling to become a daily publication ranked amongst other popular rival publications.

By 1975, Eenadu managed to achieve its target of becoming a daily publication. However, it was popular in regions and rivalry was still an issue. Eenadu hired a new set of directors to be part of its key decision and management group which drove it towards what it is today: the mostly highly circulated newspaper in the region.

Eenadu was launched from Vishakhapatnam in 1974 by Ramoji Rao, a businessman with other successful enterprises: Priya Pickles and Margadarsi Chitfunds. At that time, the Andhra Prabha, owned by the Indian Express Group, was the leading regional newspaper.

Eenadu began with a print order of 4000 copies, composed by hand and produced using a second hand printing press. But by the time it was admitted into the Audit Bureau of Circulations in 1976, its circulation was 48,000. By 1978, Eenadu surpassed Andhra Prabha’s circulation and by 1995, two other rivals Andhra Patrika and Udayam folded up, leaving Eenadu with over 75% of the audited circulation of Telugu dailies. This was primarily due to its remarkable marketing strategy.

When Eenadu expanded to Hyderabad in 1975, it divided the city into target areas, recruited delivery boys three months in advance and gave away the paper for free for a week. During the 1980s, technology enabled Eenadu to spread over larger areas besides the main cities. Earlier, it was difficult to manage even the three editions of the 1970s (Vishakhapatnam, Vijayawada and Hyderabad) because the only communication facilities were the telegram, telephone and teleprinter, which had limited presence in rural Andhra Pradesh. But with the introduction of offset printing, photocomposing software and computers, Eenadu was able to launch editions in smaller towns like Tirupathi in 1982. From the 1980s, the news editor of Eenadu, from his Hyderabad office, oversaw an enormous local-based news gathering and disseminating organization.