Jodha Akbar is a sixteenth century love story about a political marriage of convenience saga between a Mughal emperor, Akbar, and a Rajput princess, Jodhaa. But much more then that it's the marriage of contrasts. 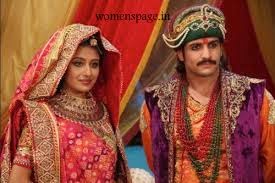 Akbar continues his search for Jodha after getting a small clue about where she might be. Akbar learns that a Krishna festival is being celebrated in Mathura and decides to go there as he is sure that even Jodha will be part of that festival. Akbar dressed as a common man walks the lanes of Mathura not fearing a supposed attack by Abul. Even Jodha is in the same market place where Akbar is. Jodha goes to have bath in the holy Yamuna river. Akbar remembers what Jodha had told him about the importance of having bath in Yamuna river. So, Akbar too gets into the waters of Yamuna. Both Jodha and Akbar are in the Yamuna. Will Akbar and Jodha finally meet each other here?
Thanks for Visiting womenspage.in