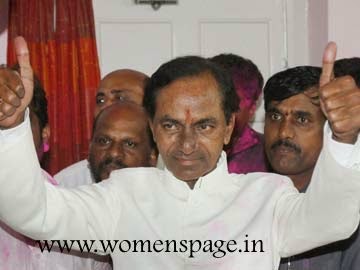 With the slogan "Reconstruction of Telangana" TRS will be going into the public and if voted into power, what next and what will TRS do to public are the questions which are needed to be answered. And for this Manifesto will play a crucial role and accordingly KCR has appointed a four men committee to prepare the TRS's election manifesto.Committee prepared Manifesto.

TRS chief K Chandrasekhara Rao is among 69 candidates announced by him at a news conference. KCR, as Rao is popularly known, will contest from Gajwel in Medak district.KCR's son K. Tarakarama Rao will seek re-election from Sircilla while his nephew Harish Rao has been fielded again from Siddipet.

KCR said the candidates for remaining 50 assembly seats and 17 Lok Sabha seats would be announced soon.

1. Water to one Lakh acres for agriculture in every assembly constituency. Overall to spread agriculture across one crore acres.
2. KG to PG free education and explanation on how to implement this.
3. Filling vacant government posts and regularization of Contract employees.
4. Super specialty hospital in every district.
5. Boost to IT Industry, Satellite township construction across Hyderabad.
6. Separate Government department for Gulf victims. To assist them like Kerala government.
7. To increase the number of districts in Telangana by 25 and decentralization of governance.
8. 125 Square yards land to poor for construction of Pakka houses.
Thanks for Visiting womenspage.in