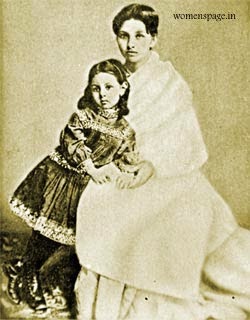 Pandita Ramabai with her child Monorama. 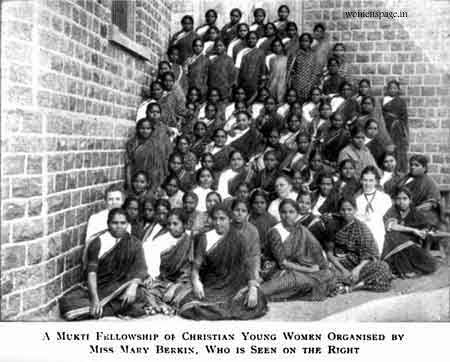 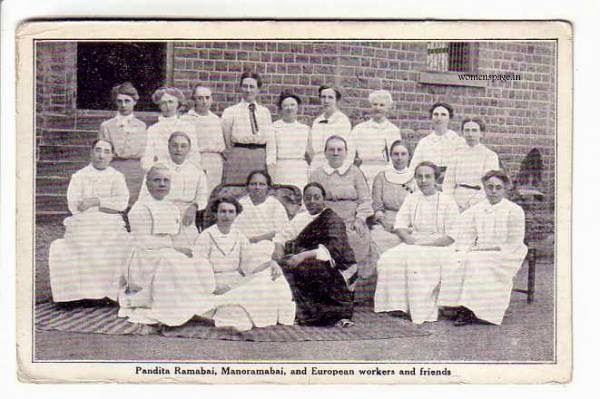 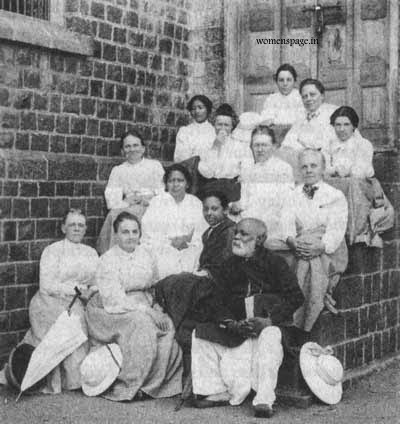 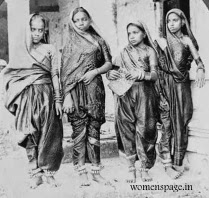 Pandita Ramabai was born during those times when the women folks of India were considered a little more than slaves, to serve their husband and bear children. They were not allowed to study, or go out on their own and a majority of Hindu women were married off when they were children to men who were decades older. Naturally there were large number of child widows who were made to live the most punishing lives.

Pandita Ramabai was fortunate in many ways. Though she was born in a Brahmin family her father was a liberal. Her father Anant Shastri,had married his wife Lakshmibai, when she was nine years old and he was forty. But defying social pressures he educated both his wife and children. Her father even refused to get Ramabai married until she becomes an adult. It was from him that she was inspired towards social reform. During her travels first with her father and then with her brother, she saw how cruelly women were treated. Disgusted she decided to do something about it.

Pandita Ramabai was born Ramabai Dongre on 23 April 1858 in Dakshina Kannada District, Mala, Gangamoola, Karnataka, to an intellectual Brahmin family. Her father Anant Shastri,was a prominent Sanskrit scholar who directed an ashram, a residential religious community and school for boys. Defying social custom, he firmly believed that women, like men, should also be allowed an education?and accordingly took it upon himself to teach Ramabai and her mother. He was probably ostracized by his colleagues for his radical views on women's education and soon after lost the ashram due to financial reasons.

Pandita Ramabai also lost her faith in Hinduism which she though supported the degradation of women by men. She converted to Christianity and spent her life rescuing women and widows from poverty, ostracization and death and giving them a new life through education.

Ramabai father Anant Shastri taught Ramabai to read and write Sanskrit, as well as how to interpret vedic texts. By the age of twelve, Ramabai had memorized 18,000 verses from the Puranas. Besides Sanskrit, Ramabai learned the Marathi, Kanarese, Hindustani, and Bengali languages

In the year 1858, in a village nestled amidst the thick forests of Gangamul was born a girl who would become one of the earliest and foremost champions of woman rights. The girl was christened Ramabai by her father, Anant Shastri Dongre who was a wealthy and orthodox Brahmin scholar. Unlike other Brahmins of his village Anant Shastri Dongre was quite a liberal, who considered that every woman has the right to education. So, he took it upon himself to educate first his wife after marriage and then his daughter, Ramabai.

Ramabai's first-class education was incredibly rare. She notes in her book, The High-Caste Hindu Woman, that less than one- quarter of one percent of Indian women at the time were able to read or write. Of these privileged few, many were required to cease their studies at a young age?often at nine- or ten-years-old?when they were married. Early marriage was the norm for young Brahmin girls, and it was often considered dishonorable for a woman to continue her education once wed. Baffling and angering Hindu traditionalists, Ramabai's father further went against the grain by refusing to arrange her marriage.

But such liberal views were anathema to the high caste villagers. As such, when he took to teaching his wife, they ostracized him, forcing him to move outside the village and live in a hut in the forest. Later, he traveled widely with his family from village to village reading the Puranas at temples, fairs and holy places. By the age of twelve Ramabai had memorized eighteen thousand verses from the Puranas becoming proficient in Sanskrit.

When Ramabai was sixteen years old, her parents died due to an outbreak of famine. Being all alone she decided to travel throughout India with her older brother, giving discourses from the Holy Scriptures and preaching social reform. The brother and sister first went to Calcutta where Ramabai impressed the high caste Brahmins with her knowledge of the Puranas.

So astonished were they with her wisdom, particularly as very few women could read at that time that they bestowed the title Pandita (scholar) and invited her to give lectures and visit places of learning. It was during these travels that she saw the plight of women particularly child-widows. It was then that she resolved to devote her life to work towards the upliftment of women. Soon her brother too passed away and she married his friend, in 1880, Bipen Behan Das Medhavi, who, though of a lower caste, sympathized with her selfless resolve. Soon after, they had a child whom they named Monorama.

Along with her husband, Pandita Ramabai decided to set a school for widows but even before the plan could materialize, her husband passed away due to cholera before their second anniversary, just eighteen months after marriage. Now a widow, Ramabai was left to raise Manorama on her own.

According to the custom prevalent at that time, a Hindu widow could not stay at her husband's house, so, Padita Ramabai left Calcutta and went to Pune. Here she established the Arya Mahila Samaj to promote female education and also work towards eradicating child marriage. She also started learning English and wrote a book called Stree Dharma Niti (Morals for Women). While setting up the Samaj, Ramabai realized that she required more training in order to successfully pursue her work and decided to go to England.

In 1883, Pandita Ramabai went to England along with her friend the English missionary Miss Hurford, and was made a professor of Sanskrit at Cheltenham Female College. There she also learned English and studied higher education as well as English Literature. In England, already distraught with the rot in Hinduism that she saw in India, Padita Ramabai converted to Christianity. In 1886, she received an invitation to attend the graduation ceremony of her cousin, Dr. Anandibai Josh.

There she befriended Dean Bodley of the Women's Medical College who encouraged her to work in America. Pandita Ramabai got the opportunity to study the American public school system and also received industrial training. Pandita Ramabai also spent her time in America giving lectures. During this time she wrote the book "High Caste Hindu Woman".

Pandita Ramabai started networking with influential people and lobbying for aid to start a secular school for child widows in India. Because of her repeated appeals a public meeting was held in 1887 in the Channing Hall of the American Unitarian Association Building. With her keen wit and flair for speaking, Pandita Ramabai was able to move the audience and Rev. Charles G. Ames appointed a provincial committee of women to consider her plan and act on it. The result was the formation of an association to act as the custodian of funds that Ramabai could use for her work.

In 1889, Pandita Ramabai returned to India after a period of six years, she continued her crusade for the betterment of the women. She wrote about her American experience in a book titled 'United States Chi Lokasthiti Ani Pravasvrutta' (Status of Society of United States and a travelogue). Within six weeks of her return to the country, pandita Ramabai had established a school called Sharada Sadan in Bombay.

During this time she also became more involved in Christianity famously noting that "One thing I knew by this time," she wrote, "that I needed Christ and not merely His religion... I was desperate... What was to be done? My thoughts could not and did not help me. I had at last come to an end of myself, and unconditionally surrendered myself to the Saviour; and asked Him to be merciful to me, and to become my righteousness and redemption, and to take away all my sin...."

Pandita Ramabai faced considerable opposition from many Indian reformers and the press for they perceived that she was influencing her students to Christianity. In 1904 she started translating the Bible in Marathi and by 1913 the New Testament was published and by 1924 the complete Bible was published. From 1896-97 and from 1900-01, India was devastated by two famines in Madhya Pradesh and Gujarat respectively. Ramabai rescued about 2000 women and girls from perishing from hunger and housed them at a 100 acre farm at Kedgaon, which came to be known as the Mukti Mission (The Home of Salvation).

For her services to the community the British Raj in 1919 awarded her the Kaiser-I-Hind medal. Ramabai is also honored with a feast day on the liturgical calendar of the Episcopal Church (USA) on April 5. The Government of India recognized her contributions for the upliftment of women in India and issued a commemorative stamp on 26th October 1989.

In July 1921 her daughter Manorama passed away and in April the next year Ramabai too breathed her last at the age of sixty four. For almost twenty years Pandita Ramabai had pursued her mission to uplift the women particularly the child widows of India inspiring many and saving countless.

Rama Dongre, who was born in Karnataka, knew Kannada language and from her father she learned Sanskrit. After coming to Maharashtra, she mastered Marathi. Later, she also learned English and lectured in England and America. After crossing 40, she started learning Hebrew and Greek for translating the holy Bible.

Pandita Ramabai is the only woman in the world to translate the holy Bible from the original Hebrew and Greek languages. While shouldering the responsibility of nearly 2,000 destitute girls and women in 'Mukti Sadan', Pandita Ramabai still found time for such extraordinary literary tasks! .
Manorama expired at the age of 40 on  July 24, 1921. Ramabai endured the shock of her beloved daughter's death with great courage and continued with the translation of the Bible. This had become a mission during the last days of her life. She displayed a strong desire to live till the completion of the translation work. This she fulfilled.

Ramabai's translation of the Bible was being printed at her own printing press in Kedgaon. A few months after her daughter’s death, i.e., on April 4, 1922, Pandita Ramabai read the last proof of her work and sent it to the printing press: the same night, this great scholar and social worker bid adieu to the world.
1858: Pandita Ramabai was born in Gangamul, Karnataka.
1880: Married Bipen Behan Das Medhavi, a friend of her brother.
1883: Left for England and became a Professor of Sanskrit at Cheltenham Female College.
1886: Moved to America.
1887: An association was formed to fund her works in India.
1889: Returned to India to work towards the upliftment of women.
1904: Started translating the Bible to Marathi.
1919: Conferred the Kaiser-I-Hind medal for her community service.
1989: A commemorative stamp was launched in her honor by the Government of India.
1922: Died at the age of sixty four.