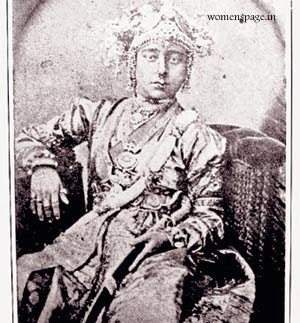 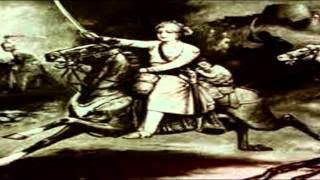 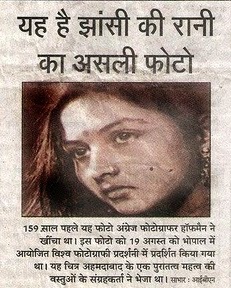 Rani Lakshmi Bai was the queen of the princely state of Jhansi, which is located on the northern side of India. She was one of the most leading personalities of the first war of India's independence that started in 1857. In this article, we will present you with the biography of Rani Lakshmi Bai, who was an epitome of bravery and courage.
Rani Laxmi bai was born to a Maharashtrian family at Kashi (now Varanasi) in the year 18 November 1835. During her childhood, she was called by the name Manikarnika. Affectionately, her family members called her Manu. At a tender age of four, she lost her mother. As a result, the responsibility of raising her fell upon her father. While pursuing studies, she also took formal training in martial arts, which included horse riding, shooting and fencing. To know the complete life history of Rani Laxmibai of Jhansi, read on.
In the year 1842, she got married to the Maharaja of Jhansi, Raja Gangadhar Rao Newalkar. On getting married, she was given the name Lakshmi Bai. Her wedding ceremony was held at the Ganesh temple, located in the old city of Jhansi. In the year 1851, she gave birth to a son. Unfortunately, the child did not survive more than four months.
In the year 1853, Gangadhar Rao fell sick and became very weak. So, the couple decided to adopt a child. To ensure that the British do not raise an issue over the adoption, Lakshmibai got this adoption witnessed by the local British representatives. On 21st November 1853, Maharaja Gangadhar Rao died.
On 7th March 1854, the British issued a gazette dissolving the State of Jhansi. Rani Lakshmibai was enraged due to the injustice when an English officer, Major Ellis came to meet Lakshmibai. He read out the official declaration dissolving the State. The furious Rani Lakshmibai told Ellis ‘‘Meri Jhansi Nahin Doongi (I shall not part with my Jhansi)’ when he sought her permission to leave. Ellis heard her and left. Battle of 1857 The battle for freedom that started from January 1857 engulfed even Meerut on 10th May.

Along with Meerut, Delhi and Bareilly, Jhansi also was freed from the British rule. Three years after Jhansi was freed, Rani Lakshmibai took over the control of Jhansi and she made preparations to defend Jhansi from the likely attack by the British. Sir Hugh Rose was appointed by the British to capture Rani Lakshmibai, alive. On 20th March 1858, Sir Huge encamped with his army 3 miles away from Jhansi and sent a message to her that she should surrender; but rather than surrendering, she stood on the rampart of her fort motivating her army to fight with the British. The battle started. Jhansi canons started routing the British. Even after 3 days of continuous firing, the fort of Jhansi could not be attacked; therefore, Sir Hugh decided to adopt the path of treachery. Finally, on 3rd April, the army of Sir Hugh Rose entered Jhansi.

The soldiers started looting people. Rani Lakshmibai decided to join Peshava by breaking the bloc of the enemy. In the night, with her troupe of trusted 200 cavalry, she tied her 12 year old son Damodar to her back and raising the slogan of ‘Jai Shankar’ left her fort. She penetrated the British bloc and rode towards Kalpi. Her father Moropant was with her. While breaking the faction of the British army, her father got injured, was captured by the British and was hanged.

After riding continuously for 24 hours covering a distance of 102 miles, the Rani reached Kalpi. Peshava judged the situation and decided to help her. He provided his squads of army to her as per her requested requirement. On 22nd May, Sir Hugh Rose attacked Kalpi. Rani Lakshmibai rushed to the front like lightening whilst holding her sword. Her forceful attack resulted in a setback for the British army. Sir Hugh Rose disturbed with this setback brought his reserved camel troops onto the battlefield. The fresh reinforcement of the army affected the ardour of the revolutionaries and Kalpi was taken over by the British on 24th May. Defeated Raosaheb Peshave, Nawab of Banda, Tatya Tope, Rani Lakshmibai of Jhansi and all the chieftains gathered at Gopalpur. Laksmibai suggested taking over Gwalior. Shinde, the Ruler of Gwalior, was pro-British. Rani Lakshmibai won over Gwalior and handed it over to Peshava.
Sir Hugh Rose had heard about the defeat of Gwalior by Rani Lakshmibai. He realized that the situation could go out of control if time was wasted; therefore, he marched towards Gwalior. Lakshmibai and Peshva decided to fight the British as Sir Hugh Rose touched Gwalior. Lakshmibai took it upon herself to safeguard the East side of Gwalior. The unprecedented valour of Laksmibai inspired her army; even her maids attired in men’s uniform took to the battlefield. The bravery of Lakshmibai, resulted in the retreat of the British army.

On 18th June, the British attacked Gwalior from all sides. She decided to break the enemy front and go out rather than surrendering. While breaking the military front, she came across a garden. She was not riding her ‘Rajratan’ horse. The new horse started going round and round near a canal instead of jumping and crossing it. Rani Lakshmibai realized the consequences and turned back to attack the British army. She got injured, started bleeding and fell from her horse. Being in a man’s costume, the soldiers did not recognize her and left her there. The faithful servants of Rani took her to a nearby Gangadas Mutt and gave her Gangajal. She expressed her last wish that her body should not be touched by any British men and embraced a brave death. The revolutionaries all over the world, the organization of Sardar Bhagat Singh and in the end even the army of Netaji Subhashchandra Bose were inspired by the valour shown by Rani Lakshmibai. The Queen of Jhansi breathed her last at the young age of 23 years.

She inspired many generations of Hindustani’s, thus becoming immortal in the freedom fight. We bow before such a brave warrior, the Queen of Jhansi Lakshmibai. The life history of the Rani of Jhansi Lakshmibai, who preferred to sacrifice her life at the young age of 23 years in battle, is very inspiring. She surprised the British by showing extraordinary fighting spirit and valour in battles fought at Jhansi, then Kalpi and lastly at Gwalior. The British Major Sir Hugh Rose had to come down to treachery so as to be able to win over the fort of Jhansi. Such an extraordinary lady, who tied her son on her back while fighting the battle, will not be found in the history of the world. The valour and brave death she chose, which gave inspiration to the patriots belonging to the ‘Gadar’ party in the First World War, the organization of Shahid Bhagat Singh and to all revolutionaries from Swatatntryaveer Savarkar to Subhashchandra, is magnificent. Lot of literature has been written on the life history of Rani Lakshmibai of Jhansi. Heroic poems have been composed in her honor.

Good judge of horses
Rani Lakshmibai was a good judge of horses. She was known for her knowledge of horses. Once a horse-seller went to King Babasaheb Apate of Sri Kshetra Ujjain with two good horses; but he could not judge them. Then the seller went to Shrimant Jayajiraje Shinde of Gwalior; but he too was unable to make out the quality of horses. Finally, he came to Jhansi. Rani Lakshmibai had a ride on one horse and told the seller that the horse was of good-bred and offered Rs. 1200/- to him. Then she rode the other horse and offered him only Rs. 50/- for the same; telling that the horse had hurt its chest. The seller accepted the facts. Those, who had examined the horses earlier, had said that both the horses were of equal strength.

Rani cared for her subjects
Once, Jhansi was badly hit with severe winter. About 1000-1200 beggars gathered near the South Gate of the city. When Rani went for ‘darshan’ of Sri Mahalakshmi, she saw the crowd and asked her minister about them. He informed Rani that poor people were asking for some coverlets for protection from cold. Rani issued an order that by fourth day, all poor people from the town should be distributed a cap, coat and blanket and the order was executed.

Prompt punishment to offenders
In Jhansi State, there was a small town named Balavsagar. The local citizens were harassed due to thieves. Rani went to this place and stayed for 15 days taking care of the problem. Many offenders were hanged and some were imprisoned.

Ranaragini Lakshmibai
The British army laid siege to Jhansi town with 60,000 soldiers. Rani had resolved to fight with the British. She personally looked into every detail of preparing for the battle. The first missile was fired at the British army by Rani. For 11 days, she gave an apt reply to the British; but betrayals by own people, made it easy for the British to enter Jhansi. Rani charged on the British with 3000 soldiers and there was a tough fight between them.

Her in-laws were very religious and abiding by Dharma
Sri Mahalakshmi was the family Deity of Jhansi’s rulers’ family. In front of South gate of Jhansi, there is a temple of Sri Mahalakshmi in a big lake. The king of  Jhansi had made all arrangements of performing ‘puja’ at this temple and lighting of lamp all the time. There are many temples in the town and all of them were managed by the ‘Sansthan’. After the death of King Gangadharbaba, Rani Lakshmibai efficiently managed them.

Rani abiding by Dharma
After the death of Raje Gangadharbaba, management of his ‘sansthan’ was taken over by the British. After her husband’s death, Rani wanted to go to Sri Kshetra Prayag for shaving her head; but permission of the British was required for the same which was being delayed. Lakhsmibai, therefore, observed a rule that till she could shave off her head, she would smear ‘Bhasma’ after bath and make offering of Rs.3/- to 3 Brahmins every day. Accordingly, Rani used to get up early and finish her bath etc. and wearing a white sari, she used to perform ‘puja’ of ‘Parthiv Linga (linga made of soil)’ every day after ‘Tulsi-puja’.

Brave Rani of Jhansi, faces death while fighting !
Shrimant Nanasaheb Peshave, Tatya Tope and Rani Lakshmibai won over Gwalior; but Jayajiraje Shinde, who had run away, took help of the British and attacked again. At Gwalior, a battle was fought during which Rani was hit with a bullet; but in that condition also, she kept on fighting. Finally, she was hit with sword and fell from her horse; but Tatya Tope immediately took her body and broke the siege. He cremated her and did last rites. Thus, Rani Lakshmibai, who fought for her Dharma, is known even today as a brave queen as ‘Khub Ladi Mardani, woh to Jhanisiwali Rani Thi!’(18 June 1858 Rani death ).
Thanks for Visiting womenspage.in