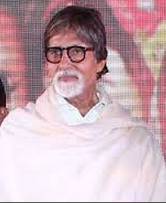 Speaking on the occasion, the 71-year-old veteran actor said, "I wish luck to all the actors standing on stage who have immensely contributed towards the making of the film, and I hope this film will be accepted by all in a manner similar to the accolades and success received by the previous Bhojpuri film."

The movie focuses on the journey of an honest man who becomes a leader for his family and people as he fights against evil forces working in the society.

Actor Gulshan Grover, who is playing an evil politician in the film said, "I am really happy that I had an opportunity of working with such renowned actors and be a part of the film."

The film, which also stars Jaya Bachchan, Dinesh Lal and Pakhi Hegde in the lead, is written and directed by Abhishek Chadha and is produced by Deepak Sawant, who has been Bachchan's personal make-up artist since more than two decades.