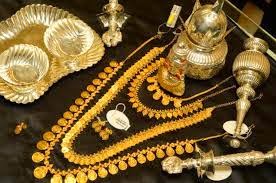 
With prices dipping steadily, this is the best time to invest in the yellow metal, they say

For a city whose inhabitants buy and flaunt gold jewellery unabashedly, this piece of advice might come in handy  purchase more. Jewellers in the city say this is the time to accumulate more gold. “This is not the time to exchange old jewellery. Use your cash to buy gold,” said a senior jeweller, who even suggested that cash stashed away in fixed deposits could be utilised for buying gold.

After a long lull in the gold market due to elections and the model code of conduct, such advice is on expected lines. The price of gold in the city has been on a downslide for the past 10 days due to various reasons including relaxation of import norms by the Reserve Bank of India, expectations from the new government at the Centre and a stronger Rupee.

LKS Syed Ahmed, chief advisor, Tamil Nadu Jewellers Federation, explained that after the election results, gold prices have seen a gradual dip. “Those in the Bullion Market believe that the new government will usher in better days for the industry and this is their way of showing the Prime Minister-designate Narendra Modi how it will react if conditions are favourable. Those in the trade now need relaxation in the 80-20 rule too. Right now, 20 per cent of imports have to be re-exported after value addition,” he added.

N. Ananthapadmanabhan, regional chairman, All-India Gem and Jewellery Trade Federation, said the reduction in prices will benefit the customers. “The prices have come down due to panic in the market. It will take some time for the impact of the import relaxation to be felt. Gold prices are expected to fluctuate for sometime. A clear picture will emerge only after the General Budget,” he said.

However, buyers like S. Wilson of Perungudi are wary of falling prices.

“The price would come down but at the same time, jewellers would add the difference on to making charges and wastage. Since I prefer to buy considerable quantities at a time, I am not rushing to buy gold now. But I am keeping a close watch on the prices. I expect they will fall even further,” he said.