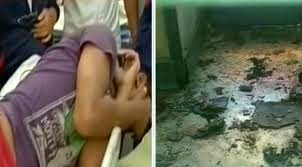 Twin explosions took place in the Bangalore-Guwahati Express on Platform 9 of the Chennai Central Railway station at 7:15 am. The explosion took place in two bogies S4 and S5. killing a young woman and injuring 14 others. The woman was an employee of the Tata Consultancy Services.

Sources say that though the explosion was major, which injured 14 people and killed 1. It is said that the incident happened on a static train that was about to leave the station. Tamil Nadu DGP has also confirmed the number of the injured. According to the DGP, the railway minister has announced an ex-gratia of Rs 1 Lakh for the deceased, Rs 55,000 for the two seriously injured and Rs 5,000 for the 7 minor injured.

Train services from the area have been delayed or stopped. However, the Bangalore-Guwahati Express will leave in about half an hour, sources say. The Tamil Nadu police said that the suspect was hiding inside the train since Tuesday and has been arrested. One more person has been detained from the airport later in the day. The bomb was kept under a seat in two black bags. Since the train was running late, it is still not certain whether Chennai was the target or some other city.


A case has been registered by the railway police and investigations will be taken over by the Special Investigation Team (SID) or the CID. Various security forces have rushed to the spot, which include the bomb squad, the local police, and the CRPF, which is responsible for the safety of the platform. However, it is yet to be ascertained why the explosion happened and the nature of the blast, i.e whether it was an IED explosion or an RDX. However, recent investigations suggest that the blast was triggered with a mobile devise.

The deceased has been identified as a 22 year old girl-Swathi-from Guntur, Andhra Pradesh.
UPDATES:
Thanks for Visiting womenspage.in