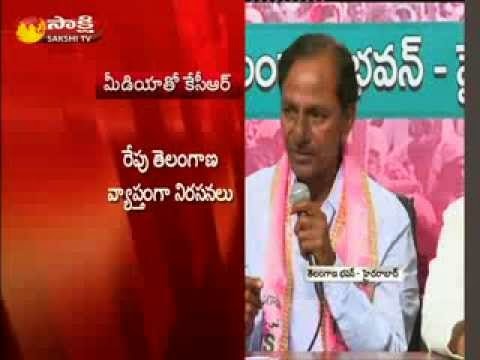 To protest the reported move of the Centre to bring an ordinance on merging 136 villages in seven mandals of Khammam with Andhra Pradesh.Telangana Chief Minister designate K Chandrasekhar Rao has called for a bandh on Thursday in the 10 districts of Telangana, opposing the Centre's move to merge seven mandals of Telangana into Seemandhra, as a fallout of the Polavaram water project.

It was decided by the previous UPA government at the Centre. K Chandrashekhara Rao is demanding that not an inch of Telangana should go to Seemandhra, the residuary state of Andhra Pradesh.

Since the TRS has come to power on its own in Telangana, the bandh is likely to be a success. The TRS has won 63 Assembly seats and 11 Lok Sabha seats in the recent Assembly and Lok Sabha elections.

Telangana has 119 Assembly seats and 17 Lok Sabha seats.KCR is scheduled to take oath as the first Chief Minister of a new state on June 2.

Five days ahead of forming the government in the newly created State of Telangana, the Telangana Rashtra Samiti (TRS) has called for a bandh in Telangana on Thursday to protest the reported move of the Centre to bring an ordinance on merging 136 villages in seven mandals of Khammam with Andhra Pradesh. TRS supremo and CM designate, K. Chandrasekhara Rao appealed to all business establishments and all institutions to close down operations voluntarily to oppose the proposed merger of Khammam villages which will be submerged in the.

The TRS maintained that it had credible information about Tuesday’s Union Cabinet meeting in Delhi clearing the proposal to bring the ordinance on the merger of seven villages in successor state of Andhra Pradesh. However, Union Minister Ravishankar Prasad maintained that the Cabinet had not discussed the ordinance.

Earlier, TRS legislator and politbureau member T. Harish Rao told mediapersons that his party had credible information about the Union Cabinet meeting clearing the proposal yesterday. The Cabinet secretary had even processed the file, he claimed.

Mr. Chandrasekhara Rao sent a communication to the media stating that the Centre had issued the ordinance under pressure from its alliance partner Telugu Desam. He condemned the injustice to Telangana by the Central government and appealed to the President not to approve what he termed as an “undemocratic ordinance”.