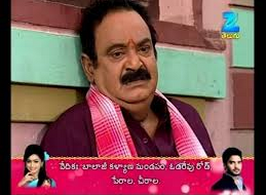 Padmavathi's marriage arrangements started in her home. Satyam's brother helped Satyam financially by saying lies that Durgamma had given the amount.

Gorantha Deepam has taken its shape with blessings of legendary director Sri Bapu, and is being produced by Vara Mullapudi and directed by V.V.Varanjaneyulu (the Star director of Chinna Kodalu).
Goranta Deepam