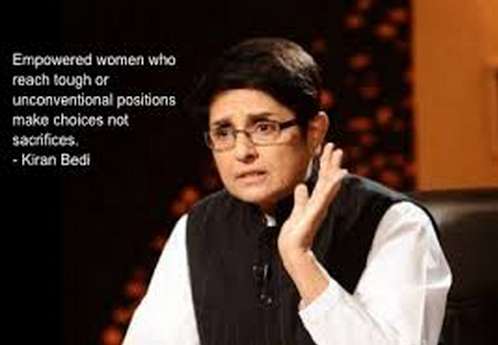 Kiran Bedi is an Indian social activist and a retired Indian Police Service (IPS) officer.Bedi joined the police service in 1972 and became the first woman officer in the IPS.Bedi held the post of Director General at the Bureau of Police Research and Development before she voluntarily retired from the IPS in December 2007.Bedi was the host and judge of the popular TV series "Aap Ki Kachehri" (English, "Your Court"), which is based on real-life disputes and provides a platform for settling disputes between consenting parties.

She has also founded two NGOs in India: the Navjyoti Delhi Police Foundation for welfare and preventative policing in 1988 which was later renamed as the Navjyoti India Foundation in 2007, and the India Vision Foundation for prison reformation, drug abuse prevention and child welfare in 1994. Bedi was awarded Ramon Magsaysay award in 1994 for Government service.


Kiran Bedi was born in Amritsar, Punjab, India. She was awarded a BA degree by the Government College for Women, Amritsar in 1968. She then earned a Master’s degree in Political Science from Punjab University, Chandigarh, graduating at the top of her class in 1970. She later obtained Bachelor of Laws in 1988 from Faculty of Law, University of Delhi. In 1993, she obtained a Ph.D. in Social Sciences from the Department of Social Sciences, Indian Institute of Technology Delhi where the topic of her thesis was 'Drug Abuse and Domestic Violence'.

She began her career as a Lecturer in Political Science (1970–72) at Khalsa College for Women, Amritsar. In July 1972, she joined the Indian Police Service, becoming the first woman to do so.Bedi joined the police service "because of her urge to be outstanding".

She served in a number of tough assignments ranging from New Delhi traffic postings, Deputy Inspector General of Police in Mizoram, Advisor to the Lieutenant Governor of Chandigarh, Director General of Narcotics Control Bureau, to a United Nations delegation, where she became the Civilian Police Advisor in United Nations peacekeeping operations.For her work in the UN, she was awarded a UN medal.She is popularly referred to as Crane Bedi for towing the Prime Minister Indira Gandhi's car for a parking violation, during the PM's tour of United States at that time.

Kiran Bedi influenced several decisions of the Indian Police Service, particularly in the areas of narcotics control, Traffic management, and VIP security. During her stint as the Inspector General of Prisons, in Tihar Jail (Delhi) (1993–1995), she instituted a number of reforms in the management of the prison, and initiated a number of measures such as detoxification programs, Art of Living Foundation Prison Courses, yoga, vipassana meditation, Murat redressing of complaints by prisoners and literacy programs.Her initiatives for the practice of Vipassana meditation were documented in the film Doing time, Doing Vipassana. For this she won the 1994 Ramon Magsaysay Award, and the 'Jawaharlal Nehru Fellowship', to write about her work at Tihar Jail.

She was last appointed as Director General of India's Bureau of Police Research and Development.

In May 2005, she was awarded an honorary degree of Doctor of Law in recognition of her “humanitarian approach to prison reforms and policing”.

On 27 November 2007, she expressed her wish to voluntarily retire from the police force to undertake new challenges in life. On 25 December 2007, the Government of India agreed to relieve Bedi of her duties as Director General of the Bureau of Police Research and Development.

Kiran Bedi along with 15 other police officers set up Navjyoti India Foundation (NIF) in 1987, NIF started with a de-addiction and rehabilitation initiative for the drug addicts and now the organization has expanded to other social issue like illiteracy and women empowerment.In 1994 Bedi setup India Vision Foundation which works in field of police reforms, prison reforms, women empowerment and rural and community development.Her efforts have won national and international recognition, and her organizations were awarded the "Serge Soitiroff Memorial Award" for drug abuse prevention by the United Nations.

In early December 2010, Bedi and others formed India Against Corruption (or "Bhrashtachar ke Virudh Janyudh") as a way of receiving public support and input on the group'salternate Lokpal Bill,a set of laws proposed to give jurisdictional authority over anti-corruption bureaucracy to the Lokpal and proposed as an alternative to the The Lokpal Bill, 2011 which sought only to give advisory authority to the Lokpal.On 16 August 2011, key members of the India Against Corruption (IAC) including Bedi were arrested four hours before the planned indefinite hunger strike by Hazare.Bedi and other activist were later released in the evening same day.After twelve days of protests and many discussions between the government and the activists, Parliament passed a resolution to consider three points in drafting of Lokpal bill.During the period of Bedi's involvement, IAC protested against corruption and urged the government of India to enact the Lokpal Bill.Although Bedi was a prominent members of the India Against Corruption movement, along with Anna Hazare and Arvind Kejriwal, Bedi split from the group in November 2013.

Bedi did not join the Aam Aadmi Party, which evolved from a section of the India Against Corruption. Before the Indian general election, 2014, she declared support for Narendra Modi as the prime ministerial candidate.

In July 1993, Kiran Bedi, the then Inspector-General of Prisons of Tihar Jail was pulled up by the Supreme Court of India for ignoring the apex court directives for providing medical attention to a foreign under-trial prisoner by initiating contempt proceedings against her. In 1988 Wadhwa Commission criticised Bedi for her role in lathi-charge on lawyers protesting against a colleague’s arrest outside Bedi’s office. Karan Thapar, host of many popular interview shows published an article on controversies surrounding Bedi after she pulled out of one of Thapar's interview show.

Bedi was criticised for being a hardliner in the negotiations with government over Lokpal bill. Later members of parliament proposed to bring a breach of privilege motion against Kiran Bedi and a few other activists for allegedly mocking the parliamentarians during the lokpal bill protests, however withdrew the notice later.

Kiran Bedi was alleged to have charged her hosts full fare for air tickets despite her paying discounted fare. She was also alleged to have charged her hosts business class fare while flying economy class and presenting false invoices.Bedi was also accused by an NGO of claiming business class fare from Delhi to Mumbai, while her travel itinerary communicated to them showed she was flying from nearby Pune. Bedi said that the money was not earned for personal gains, but given to her NGO.

In 1992 Kiran Bedi's daughter was given admission for MBBS course in Delhi's Hardinge College under a quota for student's from North-East. Kiran Bedi was posted in Mizoram at that time. Bedi stated that it was within the rules and Central Government employees were entitled to such schemes.

In November 2011, the Delhi Police, under directions of the additional chief metropolitan magistrate, registered an FIR against Bedi for allegedly misappropriating funds meant for her NGOs.The police later found no such evidence on her, and subsequently filed closure for the case.


A non fiction feature film on Kiran Bedi's life, Yes Madam, Sir, has been produced by Australian film maker, Megan Doneman. This film is being screened in film festivals around the world. Its commentator is an Academy Award winner, Helen Mirren. Kiran Bedi was present during its screenings in Toronto, Dubai and Adelaide, and to address the Q&A sessions at the end of each show.

The documentary has made a clean sweep of the award categories-“Best Documentary” with a cash award of $100,000, the biggest prize for a documentary in any film festival in the US and the Social Justice Award with $2500 at Santa Barbara International Film Festival. Yes Madam, Sir got a unanimous vote from the jury.

In 2006, Norwegian Mpower Film & Media and film maker Oystein Rakkenes released another documentary on Bedi and her prison revolution in Tihar Central Jail, In Gandhi's footsteps. The film was awarded Best Documentary at the Indo-American Film Festival in Atlanta, in November 2006.

Kiran Bedi features in the upcoming inspirational film Carve Your Destiny. The film is directed by Anubhav Srivastava.

The Kannada-language feature film Kannadada Kiran Bedi, starring Malashri as a fictionalized interpretation of Kiran Bedi, was released in 2009.

Biographies of Bedi:
I dare!: Kiran Bedi : a biography by Parmesh Dangwal
Kiran Bedi, the kindly baton by Meenakshi Saxena

” My motto in life is that nothing is impossible, no target unachievable – one just has to try harder and harder.”

- Ethics, decency and morality are the real soldiers

- What is the value of education which does not inculcate passion and fearlessness for setting right what is wrong?