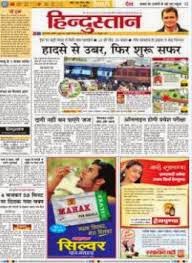 
Hindustan Dainik or ''Hindustan'' is published by Hindustan Media Ventures Limited. Earlier it was part of HT Media Ltd group, which spun off its Hindi business into a separate company named Hindustan Media Ventures Limited in December 2009.It ranks as the third largest-read daily in the country. Hindustan has 19 editions across the Hindi belt. They are spread across Delhi, Bihar (Patna, Muzaffarpur, Gaya and Bhagalpur), Jharkhand (Ranchi, Jamshedpur and Dhanbad), Uttar Pradesh (Lucknow, Varanasi, Meerut,Agra, Allahabad, Gorakhpur, Bareilly, Moradabad, Aligarh, and Kanpur) and Uttarakhand (Dehradun, Haridwar, Haldwani). Apart from these, the paper is also available in key towns like Mathura, Saharanpur, Faizabad.

In Delhi plus NCR, Hindustan is an undisputed No. 2 and has a rapidly growing even as the market is declining. Hindustan readership has grown to 120 L readers in Q4 11. As per Total Readership, Hindustan is No 2 with 385 L readers.

Hindustan in addition to high-quality reportage also aspires to become an ally to its readers in their quest for success. The ambition for the brand is to become the partner of progress for the youth in the Hindi belt.

Currently, the major editions of Hindustan are available online in epaper format.

Hindustan dominates in Bihar with an undisputed readership of about 5 million (as per the IRS 2011, Q4). It commands a massive 73% share of the Hindi readership market of Bihar. Hindustan has been the No. 1 newspaper of Jharkhand, ever since readership surveys have been reported for the state.

Hindustan has made an entry into Uttarakhand with a printing location in Dehradun, in May 2008. This edition covers key cities in Uttarakhand and West UP (like Dehradun, Hrishikesh, Haridwar, Roorkee and Saharanpur). In Jan 2009, Hindustan started its edition in Haldwan.