How to use Microwave Oven 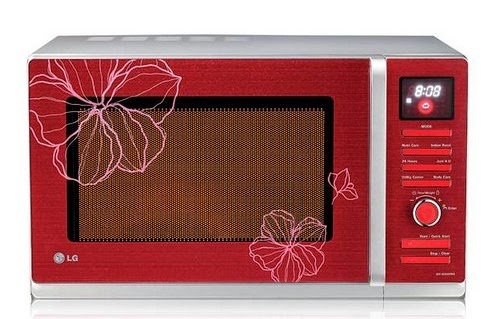 Read the instructions and safety warnings thoroughly. here's a lot of stuff you need to know in that little booklet.
Plug your microwave in. Don't plug too many appliances in at once, or you may cause a power outage.
Set the time that you want to microwave something for.
Apply your understanding to microwave specific items.

Understanding Your Microwave
Understand how a microwave oven heats food.

Microwaves penetrate and generate heat at depth within water-bearing food. In contrast, almost all other cooking methods heat the surface only, whether by conduction as in cooking with a fluid such as hot air (roasting), steam (steaming), oil (frying), or water (boiling), or non-penetrating radiation as in broiling. (Convection is merely bulk flow facilitating conduction).
A microwave generally cannot cook food that does not contain much water, including something that is light and fluffy, well.
Microwaves tend to have many hot and cold spots from "standing waves". A turntable reduces this problem by moving the food through hot and cold spots. Very thin, flat solid food cannot conduct heat through itself rapidly to the cold spots. In some microwaves small or thin items cook better if they are supported above the floor by, for instance, an inverted bowl under a plate.
Understand how heat flows through food

A cooking method heats only the outside of a food item or in a microwave, the outer layers, perhaps an inch, enough to cook a two-inch-wide chunk more or less all at once. The heat must flow through the food to cook the rest.
In a microwave, heat must also flow from better-heated to worse-heated spots.
Water-based food most food, and the only kind that microwaves can cook cannot get hotter than 212 degrees Fahrenheit (100 degrees centigrade) until all of the water in the spot being heated has been boiled away. Applying more heat than sufficient to keep the outside from cooling below that point does not increase the rate at which heat flows into the interior to enable the cooking reactions (and to a very small extent, perhaps, be absorbed by them) by conduction through the watery bulk of the food. It only dries out the outside faster.
You may be familiar with this principle through cooking a steak. One should use high heat only to scorch the surface, then low heat to cook the interior to the desired level of overall doneness without ruining the exterior.
Pressure cookers keep water from boiling until it reaches a higher temperature, and, so, also cook extremely fast. But they are more or less limited to boiling (or, in the case of specialized commercial pressure-fryers for frying chicken, deep frying).
Sometimes it is desirable to cook the food at an even lower heat, to allow the interior to reach the desired temperature and sit at it for a certain period without the outside having to get much warmer. This takes longer because there is a smaller temperature gradient to drive heat flow, but, even with the longer cooking time, can keep the reactions that would overcook the outside at near-boiling temperatures to a minimum.
Consider sous vide. Try showing off with something "sous microwave", then seared, but start simple perhaps by poaching an egg in plastic wrap and be extra careful that anything involving raw meat or otherwise potentially hazardous is cooked through to a temperature sufficient to kill anything in it. Use a meat thermometer at several points. (There is little risk of something new bad developing in food during a microwaving process itself, because that is pretty fast.)
It is very important not to overheat something containing milk, such as hot chocolate, even to boiling because the milk can irreparably separate.
Watery foods, such as watery soups, can cook well at higher heat levels because they carry heat through themselves by convection. (Thick soups will not convect and will instead bubble locally and spit under excessive microwaving power.)
Consequently, turn down the power if microwaving just a few items of food so the outside and hot spots are not overdone by the time the rest is done. Generally, use half power if heating something other than at least a large mugful of watery liquid or a heap of food a few inches high at least; even less--"defrost" setting or one-quarter power for something already cooked and at risk of overcooking such as reheating chicken.
If you have been scorching the outside of items before cooking the inside, just reduce the power at first--you don't necessarily have to increase the cooking time. Remember, the overly-high heat wasn't cooking the food faster, just drying it out.

Understand the side-effects of other cooking methods, and choose to include them if you like.
How to use LG Microwave Oven