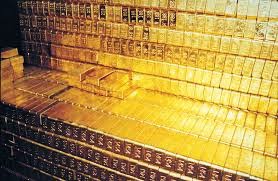 Gold lost its sheen by falling Rs 350 to Rs 30,400 per ten gram in the national capital on stockists selling, tracking a weak trend in global markets.

Traders said sentiments dampened after gold fell the most in three weeks in overseas markets on speculation that the Federal Reserve would further curb monetary stimulus as the US economy recovers, reducing demand for the metal as an alternative investment.

Sovereign, however, held steady at Rs 25,100 per piece of eight gram in limited deals.