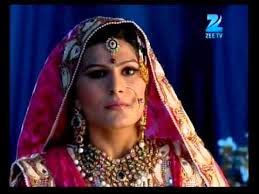 Akbar is completely disheartened at learning Mahamanga's truth. While Akbar snatches Mahamanaga's right to call him her son, Mahamanga stands stunned. Rukaiyaa tries to share Akbar's sorrow with him. But Akbar learns that even Rukaiyaa Begum was helping Mahamanga as she too was jealous of Jodha. Rukaiyaa tries to apologize to Akbar but Akbar feels upset knowing that his own people have been acting against him behind his back. Salima Begum speaks to Akbar and tries to console and advice him. Adham Khan sees his mother in a depressed state and shows his anger against Akbar. He decides to kill Adgah but Mahamanga stops him and wants to handle everything herself.

Jodha Akbar is a sixteenth century love story about a political marriage of convenience saga between a Mughal emperor, Akbar, and a Rajput princess, Jodhaa. But much more then that it's the marriage of contrasts.Thanks for Visiting womenspage.in