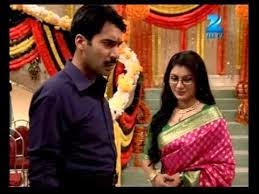 Suresh is forced to exchange rings with Pragya although he loves Bulbul. After the ring ceremony gets over everybody is extremely happy for Pragya as she is finally getting married. Suresh's friend advises him to do something about this misunderstanding, but Suresh does not do anything about it. Bulbul meanwhile goes for a meeting with her boss. She disagrees to share the same room with her boss when they arrive at a hotel. Suresh develops some courage and decides to reveal about the misunderstanding to everybody. Everybody is in deep shock when Suresh reveals that he loves Bulbul and not Pragya. Even Pragya does not believe her ears as Suresh cancels the engagement.

Kumkum Bhagya' is its Indian interpretation, following the life of a Punjabi matriarch Sarla Arora who runs a marriage hall and lives with the hope of seeing her two daughters Pragya and Bulbul who're poles apart, happily married some day! Known for making shows that are women-centric, the pivotal characters of this new show are a bunch of strong, feisty women, living together in an all-female, matriarchal family.Thanks for Visiting womenspage.in