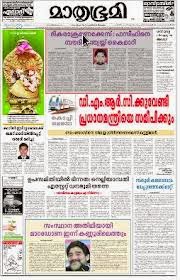 Mathrubhumi  is a Malayalam language newspaper that is published from Kerala, India. Mathrubhumi was founded by K. P. Kesava Menon, an active volunteer in the Indian freedom struggle against the British. The word "Mathrubhumi" roughly translates to "mother land". It is the second most widely read newspaper daily in Kerala, after Malayala Manorama. They also publish a variety of magazines and supplements including the prestigious weekly literary magazine, Mathrubhumi .

Based in the northern Kerala town of Kozhikode, Mathrubhumi was founded in 1922 in the aftermath of Mahatma Gandhi's non-cooperation movement as a public limited company. This status makes it rare among newspapers, which tend to be closely held private companies owned by a single family.

K.P Kesava Menon, who was then Secretary of Kerala State Congress Committee, realized the urgent need for a pro-freedom movement publication from the Malabar region. And he, along with his confidants like K. Madhavan Nair, Kuroor Neelakandan Nampoothirippad, K. Kesavan Nair and P. Achuthan, resolved to register The Mathrubhumi Printing and Publishing Company Limited and the registration took place on 15th of February 1922.

K. Madhavan Nair became the first Managing Director of the Company. Madhavan Nair (1882-1933) was the leading the freedom-struggle from Malabar and was a member of Madras Constituent Assembly.The newspaper's founders were members of the Indian National Congress led by K. P. Kesava Menon (1886-1978); its shareholders included about 350 men and women of Kerala. Though Mathrubhumi lost money regularly in its early years, that did not matter, its historian noted in 1973, because its goals were not those of business but of social oppression and unrest. It battled gallantly with British authorities before independence and bitterly with Kerala's Communists from the late 1930s.

By the 1940s, as Kerala's literate and politicised character forced itself to the attention of officials, the British acknowledged that Mathrubhumi, reaches every village in the district [of Malabar] and a mischievous attack of the police [in Mathrubhumi] is likely to do, a great deal of harm among the mass of the people who are able to read but not able to think for themselves. Mathrubhumi played important roles in many social reformation movements such as Vaikom Satyagraha and Guruvayur Satyagraha against untouchability. Participating in the Satyagraha, K.P. Keasava Menon was arrested and was sent to jail. Independence activists such as P. Ramanunni Nair, K. Kelappan, P. Narayanan Nair, C. H. Kunjappa, K. A. Damodara Menon, and A. P. Udhayabhanu have served as Chief Editors of the newspaper, and also Mathrubhumi has witnessed some of the very splendid Indian Civil Service officers as editors.