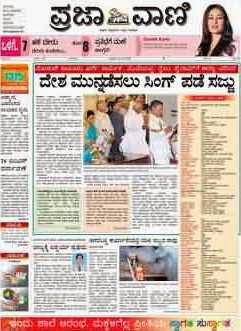 
Prajavani is the oldest Kannada-language broadsheet daily newspaper published in the Indian state of Karnataka. As of 2012, it had a circulation of 530,000, making it the second largest circulated Kannada newspaper.

Prajavani was founded in 1948 in Bangalore by K. N. Guruswamy, a local liquor businessman in Bangalore. The Printers (Mysore) Private Limited, the company which owns the newspaper, continues to be privately held by members of the founding family.

Prajavani (PV) has a history of being a politically independent newspaper, although it tends to opine with a liberal tilt. It is known for espousing the causes of Dalits, encouraging women's empowerment and taking pro-poor positions on economic issues. It has managed to maintain an independent position, despite an increasingly polarized media landscape in Karnataka. Prajavani uses the tagline "the most trusted Kannada daily newspaper", which appears below its masthead.