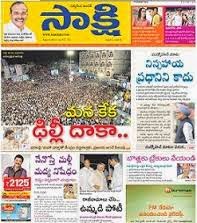 Sakshi is Telugu language daily newspaper in India and world. Sakshi is published in 23 editions by Jagati Publication. It is owned by Y. S. Jaganmohan Reddy (son of the late Andhra Pradesh chief minister Y. S. Rajasekhara Reddy) and run by Sajjala Ramakrishna Reddy[Citation Needed], the editorial director of Jagati Publications.Sakshi was launched on March 24, 2008, the first regional newspaper designed by the world renowned newspaper designer, Mario Garcia. According to Price Water House Audit, the newspaper had an initial print run of 1,286,670. Sakshi news paper started with an introductory price of Rs 2/- per week day which led Sakshi to became one of the top ten of regional newspapers in India.The Mudra Institute of Communications from Ahmedabad visited Sakshi to study this success.
According to the Audit Bureau of Circulation, circulation figures released in October, 2010, Sakshi is the second largest circulating newspaper in Andhra Pradesh after Eenadu with a circulation figure of more than 1.3 million. It is one of the richest Indian newspapers. In August 2010, its AIR stood at 4.638 million.Sakshi began with 23 editions published simultaneously from 19 cities in Andhra Pradesh along with the four metropolitan areas of Mumbai, Delhi, Chennai and Bangalore. This record was acknowledged by the Limca Book of Records. Sakshi was the first newspaper in India to publish all of its pages in colour. Sakshi is now available online every day with all of its editions along with the regional editions.
Revenue from advertisements in Sakshi passed Rs 10,000,000,000 during the last four years and ten months. According to ABC Audit (July - December 2012), circulation reached 1,538,845 with a readership base of 14.3 million. According to ABC Audit (January - June 2013), Circulation has fallen to 1,250,664 with readership base of 3.3 million.Sakshipost is the Sakshi group's first online news portal.Sakshi Education provides in-depth concepts for students who are planning to appear for board and competitive examinations. In addition to this, students will have mock and online tests which will enhance their performance in IIT-JEE, EAMCET, ICET etc. It offers expert articles to enhance communication skills in English and provides current affairs for competitive exams. It acts as a link between students, career prospects and subject experts.