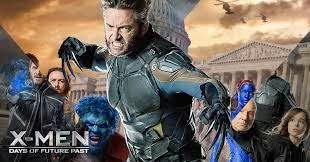 When the film starts we first see the future where robotic sentinels have been programmed to somehow track down and execute mutants. Magneto (Ian McKellen) and Professor X (Patrick Stewart) are around and are losing the war but they continue their fight.

The remaining X-Men, now clad in futuristic black rubber have a plan in mind: using the teleportation abilities of Kitty Pryde (Ellen Page), she will now send Wolverine (Hugh Jackman) back to the 1970s. His job is to stop the creation of the Sentinels. The tough part for him is to get Dr. Xavier and Magneto to work with him again.

There are some interesting twists and turns to keep you engrossed, Dr. Bolivar Trask (Peter Dinklage) was killed by Mystique (Jennifer Lawrence) as he was conducting some experiments on mutants. The story unfolds step by step and within no time you are a part of the X-Men world.

One of the best scenes is the escape from Pentagon. A young man's escape with the help of Quicksliver (Even Peters), a mutant who runs at supersonic speed and manages an escape from a high security den, the scene funny and spectacular! There are some important appearances by Anne Paquin and Hally Berry.

The action and visual effects are excellent. The scale in many scenes is breathtaking. For Hugh Jackman fans it's a must watch, he is in top form once again and is the show stealer!

X Men: Days of Future Past