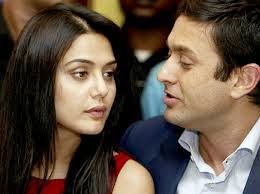 Preity Zinta, who is also co-owner of Kings XI Punjab cricket team, has filed a police complaint against her former boyfriend Ness Wadia, alleging that he molested, abused and threatened her inside Wankhede stadium in south Mumbai.

Here are 9 key points about Preity Zinta's molestation complaint and her relationship with Ness Wadia:

1. In her complaint, Preity Zinta said that she was molested by Ness Wadia inside Wankhede stadium on May 30.

2. Preity was at Wankhede stadium when Wadia allegedly pulled her hand and abused her in front of many people. She also claimed that after their break-up, Wadia used to often harass her.

3. On May 30, an IPL match between Kings XI Punjab and Chennai Super Kings was played at the Wankhede stadium.

4. The FIR was registered against Wadia under IPC sections 354 (assault or criminal force to woman with intent to outrage her modesty), 504 (intentional insult with intent to provoke breach of the peace), 506 (punishment for criminal intimidation) and 509 (word, gesture or act intended to insult the modesty of a woman).

5. Zinta gave an application to the police on Thursday, which was converted into an FIR on Friday. Her full statements could not be recorded as she had to take a flight out of the city. "The actor claimed that she had to go out of the city and hence she could not approach the police earlier. As soon as she returned, she lodged a complaint," a police officer said.
6. Preity Zinta and Ness Wadia had broken their five-year long relationship sometime back.

7. Reacting to Preity's complaint, Ness Wadia said that he was "shocked" and "dismayed". "The allegations are totally false and baseless," Wadia told TOI. "It is disgusting that she would stoop to this level."

8. Preity Zinta was "upset as Wadia was seeing someone", sources told TOI. Sources close to Zinta and Wadia said he started seeing someone two months ago and they got close when the IPL was being played in the UAE.

9. "Zinta could not digest the fact that her former boyfriend, who is still her business partner, was involved in another relationship," said sources close to the Wadia camp.

10. Ness Wadia's mother had to undergo serious discomfort when attending a Kings XI Punjab match resulting in an argument between the two. Zinta has been trying to garner publicity out of whatever is left of her relationship with Wadia, sources said.
Thanks for Visiting womenspage.in