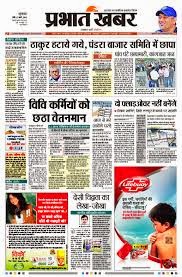 Prabahat Khabar commenced its publication in 1984 from Ranchi and the same is being published from many other towns of Jharkhand and Bihar states as mentioned below:-
Thanks for Visiting womenspage.in