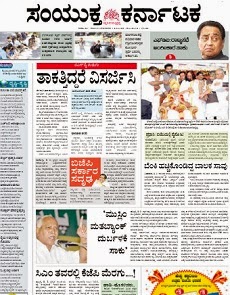 Samyukta Karnataka is a major Kannada newspaper which has its headquarters in Hubli, Karnataka. It is also published from Bangalor.To promote patriotism, truth and nationalist ideals, Loka Shikshana Trust was founded by senior freedom fighters of India around 80 years ago, during the turbulent national movement. In the pursuit of its ideals the trust has undertaken many public activities, including journalism.

Loka Shikshana Trust's major publication, Samyukta Karnataka, a Kannada daily, has a good reputation and public standing. Born out of freedom movement, 76 years ago, it has played an active role in building patriotism and in safeguarding land, language and resources.Although it is the oldest daily in Karnataka, it has also been keeping pace with the rapid technological advancements.