Shiva Mantra is mainly used to dispel fear; particularly the fear of change. Shiva mantra is chanted for the protection against diseases, sorrows, fears etc. Recitation of this Mantra gives success and Siddhis. Shiva Mantra has the power to boost a person's inner potential and strength. Shiva Mantra helps to cleanse the body, mind and soul of all the stress, rejection, failure, depression and other negative forces that we face in our daily lives. Shiva Mantra is to be chanted when one feels weak and drained of energy; both mental as well as physical. Shiva Mantra Japa is also an astrological remedy to ward of the negative influences of the Maraka planet in the birth horoscope. 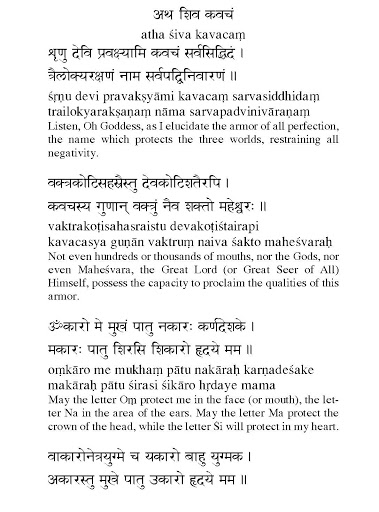 (Rishbha (deva) was born as a king in the family of Swayambhuva manu. He married Meru devi and had one hundred children,. When they grew up, he entrusted the kingdom to his eldest son and retired to the forest. He became a great sage and a great devotee of Lord Shiva. He met in the forest a prince called Bhadraayu, who was driven out from his kingdom along with his mother by his enemies. Rishabha deva taught him the Shivakavacha, using which Bhadarayu regained his king dom. This story forms a part of Skanda purana This Kavacham (armour) addressed to Lord Shiva is unique and very important.)

For the great chant of Shiva’s armour,
The sage is Brahma, the meter is Anushtup, The god addressed is Sada Shiva Rudra , the strength is “hreem”, the nail is “ram”,and the root is “Sreem, hreem , kleem.”
The Shiva Kavacha is being chanted to please Lord Sada Shiva.

For the great chant of Shiva’s armour,
The sage is Rishabha muni, meter is anushtup, The god addressed is sAmba Sada Shiva ,
Root is “om”, the nail is “shiva” and
This is being chanted to please my God Samba sada shiva.)

Om salutations to the dazzling and shining God, Om Hraam God who gives all powers,
Oh soul of God , salutations by the thumb.

Om salutations to the dazzling and shining God, Om Nam Rim who grants perennial satisfaction , Oh soul of Purusgha, salutations by the forefinger

Om salutations to the dazzling and shining God, Om Nam Rum, who gives the power of the ancient, the soul of Aghora salutations by the middle finger.

Om salutations to the dazzling and shining God, Om Shim raim , one who gives independent power and the soul of Vama deva salutations by the ring finger

Om salutations to the dazzling and shining God, Om vam roum , he who grants strength of aluptha, the soul of SAdhyojadha, salutations by the little finger.

Om salutations to the dazzling and shining God ,Om tam ra he who he grants primeval power , soul of all salutations by palm and back side of hand.

I salute Shambu the consort of Parvathi,
Who has diamond like teeth and three eyes,
Who has black neck and kills his enemies,
And who has thousands of fearful hands.

For your benefit I would tell you the “armour of Shiva”,
Which is very secret among the Puranas,
Which is holy and removes all the sins that are committed,
Which leads to victory and prevents all dangers.

After saluting the great God who is spread through out,
I would tell you the “armour of Shiva, which protects all men.

You should sit in a clean place ,
Assume the proper sitting position,
Win over your senses , control your desires,
And meditate on Shiva who is forever stable.

I meditate on the great lord , who is full eternal joy,
Who lives in the lotus of one’s heart,
Whose innate luster spreads all over the sky,
And who is beyond the senses and is micro and also end and beginning less.

By deep meditation cutting off the ties of Karma,
For a long time and getting drowned in the divine joy,
With chant of the six letter mantra of Lord Shiva,
You have to protect your self with Shiva’s armour.

May I, be saved by The God of all devas,
From this deep chasm called domestic life,
And his sacred divine names ,
Which are the basis of all great mantras,
Destroy all the sins in my heart.

Let me be protected everywhere by the Lord of the universe,
Who is full of the light of happiness, who is the divine soul,
Let the God ,who is micro among micros, who is all powerful,
Protect me completely from all sort of fears.

Let him who in the form of earth looks after the earth,
Look after me from, the fear of land related issues,
Let him who gives life to all beings in the form of water,
Protect me from everything concerning water.

Let the death like Kala Rudhra , who dances,
At the end of ages after burning the universe.
With playfulness protect me from problems.
Created by forest fire and cyclone.

Let him who shines like gold and the glittering lightning,
Who holds in his hand symbols of knowledge, boon, protection and sword,
And who has four faces and three eyes,
Be in the east and protect me there.

Let Aghora who holds the sword , Vedas , goad , rope, trident,
Skull , drum and Rudraksha in his eight hands,
And who is blue in colour and has four faces,
Protect me from the southern side.

Let him who shines white like jasmine , moon . conch and crystal,
Who holds Veda, chain of beads , protection and boon in his hands,
And who shines with three eyes and four necks,
And who is called Adhijatha* protect me from the west.
* Born in the beginning

Let him who holds chain of beads and axe in his hand,
And shows sign of boons, protection by his other hands,
Who is of the colour of the tendrils of lotus flower,
And who has three eyes and four heads,
And is called Vama deva protect me from north.

Let him who is holding Veda goad , rope , axe , Skull, Rudraksha
And hatchet in his hands and showing signs of protection by one hand,
Who is of white colour and who has five faces and is shining,
And is called Eesana murthi protect me from above.

Let my ears be protected by him who is sung about by Vedas,
Let Kapali (God with skull) protect my cheeks,
Let the five necked one protect my neck,
And let the God with Veda as toungue protect my toungue.

Let the Lord of mountain with a blue neck protect my neck,
Let my both hands be protected by he who holds Pinaka bow,
Let the god having Dharma as hands protect my arm pits,
Let my bosom be protected , by him who destroyed the yaga of Daksha,

Let me be protected from the great fear,
Due to the attack of the army of enemies,
By Veerabhadra who burns , like the fire of deluge,
And who due to his anger turns the universe up and down.

Let Mruda break with the terrible white axe,
The innumerable army of the enemies,
Which consists of several formations,
Of soldiers and horses, elephant and chariot borne troops.

Let the trident of the God who destroyed the three cities,
Which burns like the fire of the deluge destroy my enemies.
Let the Pinaka bow of Lord Shiva drive away.
Tiger, lion , bear , wolf and other wild animals.

One who applies ash all over, one who wears the great gem studded crown, One who wears Manikhya(ruby) as ornament, He who takes the angry form and does creation upkeep and destruction at deluge, he who destroyed the fire sacrifice of Daksha, He who broke the great God of death , He who stays in Mooladhara chakra , He who is above principles,

He who carries the Ganga, He who is God to all devas, He who is the basis of the six adhara Chakras, He who leads to three types of fulfillment, He who is the chief of the endless billions of universes, He who wears ornaments of the eight great serpents viz Anantha, Vasuki, Thaksha, Karkodaka, SAnkha , Kulika , Padma and Mahapadma,

He who is perennially clean, completely wise , complete , divinely joyous and without second, He who is extremely peaceful, He who has a shining form, He who is full of light,

Save , save me everywhere,
Shine , shine , destroy , destroy, the great fear of death,
Remove , remove the fear of theft and robbery,
Put out, put out , the fear for snakes with poison,
Kill, kill thieves,,
Drive away, drive away my enemies,
Split, split with trident,
Kill , kill with white axe,
Cut , cut with the sword,
Hit , hit with the skull stick,
Powder, powder with the steel pestle,
Strike, strike with arrows,
Scare , scare Rakshasas,
Drive away drive devils,
Scare away scare away Koosmandas, Vetalas Mareechas and Brahma Rakshas (evil spirits)
Give me, give me protection,
Console , console , who am afraid,
Lift me up, lift me up from fear of hell, Keep me alive , keep me alive,
Save me, save me from effects of hunger and thirst,
Make me who is sad happy,
Cover and protect me with armour of Shiva,
Hey victor over death, Thee eyed one , ever peaceful one , my salutations to you.

After wards after performing nyasa starting from the heart and performing the worship of five deities , you are getting free by chanting boo, bhuva , suva …etc.

This protective armour of Lord Shiva as spoken by me ,
Removes all ills and bad things, and is secret for all beings.

That man who wears this greatly divine armour of Shiva,
Due to the blessing of Lord Shiva will never have any fear.

People whose life is about to be over,
Or the one nearing death,
Or the one who is afflicted by leprosy,
Would get rid of those problems,
And would be blessed with long life.

If any one wears this armour,
Which removes all poverty,
And increases good luck,
He would be worshipped even by devas.

He with the greatness of the armour of Shiva,
Would be saved from great as well as minor sins,
And at death would be blessed with salvation.

Oh young man, you also wear this armour given by me,
And by wearing it you would see good things coming to you.

Telling thus the sage Rishabha gave the son of the king,
A conch which makes loud noise and a sword which cuts well.

Then he applied the ash made divine by the chant all over him,
And gave him further the strength of 12000 elephants.

Due to the effect of the ash applied on his body,
The prince got strength, wealth , courage and memory,
And shined like the Sun of the autumn.

Then the sage told the prince saluting him,
This sword given by me has the strength ,
Of the holy chants as well meditative power.

If you show and shake this very sharp sword.
The enemy who sees it would die immediately.

Those enemies who happen to hear the sound of this conch,
Would faint immediately and would fall down leaving all arms.

This sword and conch which are divine destroy enemy’s army,
And bless one’s own army with bravery and great power.

These along with the power of the armour of Shiva,
Has greater strength than 12000 elephants.

Due to these and by the strength given by the sacred ash,
You would regain the throne of your father and riule over earth.

Thus encouraging the prince called Bharayus,
Who was hearing these along with his mother,
The sage called Rishabha departed the way he wanted.