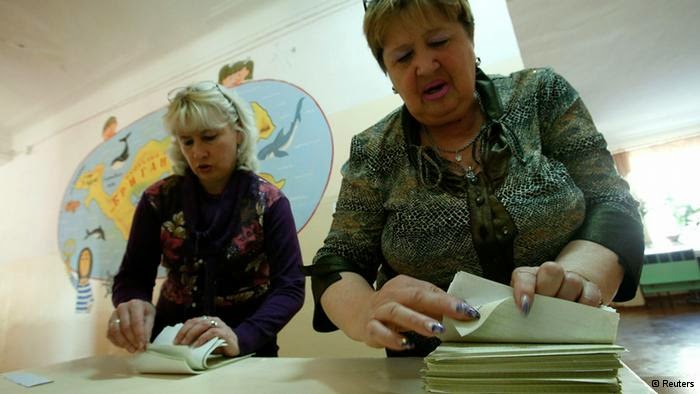 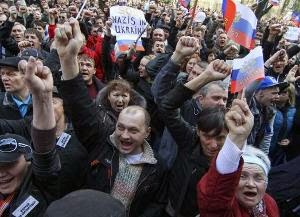 There are many versions raising about the upcoming Crimean referendum.The stories coming that there is no real choice in the referendum,two ways of leaving Ukraine and joining Russia.

"This annexation ... goes beyond Ukraine. It concerns us all," France's UN ambassador said after the security council vote. US President Barack Obama is sending Vice President Joe Biden with a message of reassurance to Poland, a former Soviet bloc state, and the Baltic states, which until 1991 were ruled by Moscow. Putin's spokesman Dmitry Peskov insisted there should be no new cold war in an age of globalization and economic interdependence: "We hope with all our heart that both we and our partners have enough political wisdom and sense of political realism to avoid sliding into an even deeper confrontation."

Aksyonov and Moscow do not officially acknowledge that Russian troops have taken control of Crimea. They say that thousands of unidentified armed men, visible across the region, belong to "self-defense" groups created to ensure stability.

But the Russian military has done little to hide the arrival of thousands of soldiers, along with trucks, armored vehicles and artillery. Masked gunmen surrounding Ukrainian military bases in Crimea have identified themselves as Russian troops.

The New York Times article mimics Balmforth's untenable contention that to oppose something you need a yes-or-no question. The Times titles its article "2 Choices in Crimea Referendum, but Neither Is ‘No’ " The article is by Noah Sneidermarch. The title is true but trivial since Crimeans can still say no to annexation and joining Russia if they choose the other option.

Of course, there are many issues about the referendum. It will be regarded as illegal by Ukraine and most countries. It is being held at short notice and with Russian troops in Crimea. The pressure is on to vote for annexation, which will probably pass, but there is no doubt that Crimeans can reject annexation and choose to remain within Ukraine but with more autonomy to choose their own future. Even in the unlikely event that choice did win out, the Crimean parliament might try to work around it and join Russia.
Thanks for Visiting womenspage.in