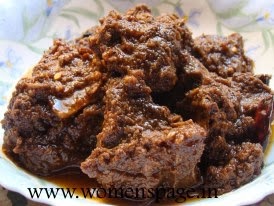 Heat mustard oil in a heavy bottom pan and bring it to smoking point  simmer the heat and let it cool down a bit before adding ingredients Add ginger garlic paste and fry for a couple of minutes now add onion paste and cook till it is golden brown. Then add turmeric powder, red chilli powder, black pepper powder, coriander powder, Kalonji, Methi seeds, cumin seeds and fennel seeds. Fry well. Then add mutton pieces fry till brown. Now add little water and salt to taste. Simmer and cook the meat till just underdone but make sure water is evaporated completely (Keep sprinkling water in between if required for the meat to be cooked) Heat some oil in a pan and add whole red chilli, hing, and roasted powder (made of star anise, clove and cinnamon). Fry for a minute and add this to the meat, mix well for a couple of minutes.Then add vinegar and cook for 2 to 3 minutes. Check for seasoning and take off the heat and let it cool completely. store in dry jar.

Health benefits of pickles:
Pickling is one of the oldest methods of food preservation. Before the invention of modern refrigeration, pickling was the only way to preserve various foods for future consumption. Generally, pickling began as a method to preserve foods that are either exotic or seasonal and limited by nature and cultivation.
The process of pickling can be generally traced back to India, as it is believed to have originated about 4,000 to 5,000 years ago. With hot summers and a lack of water during summers, food production decreases during the summer. Thus, there is a need to preserve excess food produced during winters and hence, the process of pickling was invented to overcome this problem.
The traditional way of preparing long-lasting pickles in the Oriental style uses ingredients such as salt, oil, and dry chilli powder mixed with condiments. These ingredients are added according to set proportions. The proportions are meant to cancel out the other’s effect on taste.
Thanks for Visiting womenspage.in