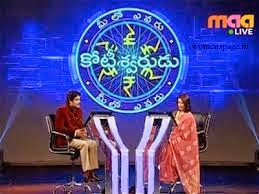 Nagarjuna Akkineni to host game show with Rs.1 Cr prize. Maa Television Network Limited (MAA), the leading Telugu TV entertainment channel network, is pleased to announce the launch of the biggest ever television show “Meelo Evaru Koteeswarudu” (MEK), the Telugu format of the popular game show “Kaun Banega Crorepati” (KBC).The show will be produced by Big Synergy. Maa is also pleased to announce Nagarjuna Akkineni as the host for the show, another first-of-its-kind in the Telugu television industry.

While the game show is an established format, the big star Nagarjuna Akkineni’s presence as the host for the show will bring a lot of cheer for TV viewers. It is for the first time that the Tollywood star of the stature of Nagarjuna Akkineni is coming on Telugu entertainment TV. “Maa TV is known for its vibrant, innovative and pleasant programming, and has attained the No.1 Telugu GEC status now.

With Nagarjuna Akkineni as the host, the new game show will be a visual treat for the viewers with an opportunity to win up to Rs. 1 Crore cash prize. It will be a trend setting initiative in the Telugu TV industry”, said Nimmagadda Prasad, Chairman of MAA TV.

“I am excited about my role as the host for MEK. I am looking for this kind of opportunity on TV platform as it reaches each and every Telugu person.  The show will bring the best drama of human life without missing on the entertainment quotient”, said Nagarjuna Akkineni.

“Maa TV has a glorious journey. With several strategic initiatives in the last few years, Maa TV has redefined the Telugu GEC space. The launch of MEK will be a rich tribute to the viewers and it will set a new benchmark in the Telugu entertainment TV”, said Aravind Allu, a Director of Maa TV.

Amala wife of Nagarjuna interview's in his new show.
Thanks for Visiting womenspage.in