The much popular Kaun Banega Crorepati produced by Big Synergy is all set to conquer the entire south market by launching in the fourth state with Andhra Pradesh as Meelo Evaru Koteeswarudu (MEK). The show will be hosted by popular actor Nagarjuna Akkineni and air on Maa TV. 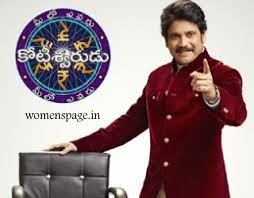 With prize money of Rs 1 crore, the entries for MEK will begin from 24 April in which people can answer questions through SMS and interactive voice response calls. The show is slated to go on air from the first week of June.

“Maa TV is known for its vibrant, innovative and pleasant programming, and has attained the number one Telugu GEC status now. With Nagarjuna Akkineni as the host, the new game show will be a visual treat for the viewers with an opportunity to win up to Rs 1 crore cash prize. It will be a trend setting initiative in the Telugu TV industry”, said Maa TV chairman Nimmagadda Prasad in a press statement.

MEK, produced by Big Synergy, is Nagarjuna’s first TV venture. “I am looking for this kind of opportunity on TV platform as it reaches each and every Telugu person.  The show will bring the best drama of human life without missing on the entertainment quotient”, revealed Nagarjuna Akkineni.

“With a bouquet of four channels, namely Maa, Maa Music, Maa Movies and Maa Gold, Maa stands out from the cluster of channels through its unique programming quality and content. The new big initiative will build the Maa brand equity further and take the network to the next level”, Maa TV group head C Ratnakar Rao ended.
Thanks for Visiting womenspage.in