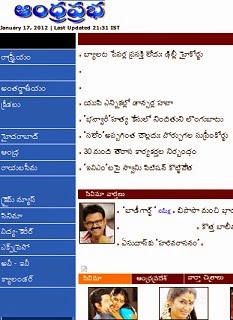 Andhra Prabha is a Telugu language daily newspaper published in India. The website (http://www.andhraprabha.com) is now owned by The New Indian Express Group of Companies but the news paper was sold to entrepreneurs from Kakinada.

The paper carries the following features regularly - Muhurtam, Graha Balam, Kreeda Prabha, Aurah!, Nayika and Chintana.
Supplements include:
The Andhra Prabha paper was started from Chennai on 15 August 1938 by Ramnath Goenka to challenge the sway of the leading Telugu newspaper at the time, Andhra Patrika.A reader from Bellary had suggested the name Andhra Prabha to the management of the paper which was promptly adopted by them. The then management of Andhra Prabha awarded him with the sum of Rs. 116 as a token of their gratitude. The paper was initially edited by Khasa Subba Rao (joint editor of Indian Express at the time) who was succeeded by Nyayapati Narayana Murthy. In 1942 Narla Venkateswara Rao was promoted from news-editor to editor of the paper. He held this position for seventeen years, a period of time that is considered epochal in Telugu journalism. He was responsible for many revolutionary changes in headline and caption writing, in the framing of action photos, in news display and in page make-up. It was during Narla's editorship that the paper was closed down for a brief period during the Quit India Movement. The newspaper was shut down for a few months in order to protest the British Government's attempt to impose censorship of the press. The Andhra Prabha was also banned from the State of Mysore and the State of Hyderabad because it opposed the feudal nature of these regimes.Narla later tendered his resignation when he had a falling out with Ramnath Goenka over his sympathy with the workers in the press which resulted in a strike in Chennai. He was succeeded by Neelamraju Venkataseshaiah. Neelamraju Venkataseshaiah was succeeded by Panditharadhyula Nageswara Rao in 1969. Nageswara Rao served Andhra Prabha till 1976.