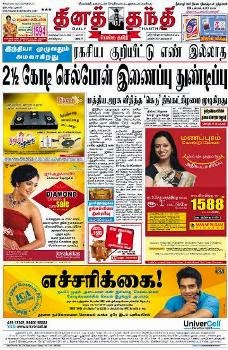 Daily Thanthi is a reputed daily Thamizh newspaper in Nellai, Bengaluru, Mumbai, Chennai, Coimbatore, Madurai, Erode, Dindigul, Trichy, Salem, Nagercoil, Cuddalore, Vellore, Pondicherry and Thanjavur. It is owned by Mr.B. Sivanthi Aditanar. It was founded by S. P. Adithanar, a lawyer trained in Britain and practised in Singapore, with its first edition from Madurai in 1942. The publication spread over Tamil Nadu and the neighboring states of Puducherry and Karnataka. In 1940, he opened editions in Madras, Salem and Thiruchi. While the Salem attempt failed, the Tiruchirapalli edition had to be reopened in 1954.

Daily Thanthi became one of the largest Tamil language dailies by circulation within a few years; it has been a leading Tamil daily since the 1960s. It has today 15 editions with the latest being the Mumbai Edition. It is the highest circulated Tamil language daily in Bangalore and Puducherry, and one of the largest in Tamil Nadu, Daily Thanthi's circulation during (December 2012) was 16,14,874 copies certified by [Audit Bureau of Circulations - ABC).It has the largest readership base amongst Tamil Newspapers with 73,53,000 readers spread across the Tamil Diaspora.