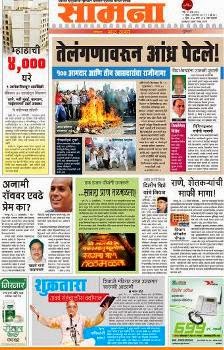 
Saamana is a Marathi-language newspaper owned by the Shiv Sena, a political party in Maharashtra, India. The paper was launched on 23 January 1988 by Bal Thackeray.A Hindi version of the paper Dopahar Ka Saamana was launched on 23 February 1993.

Until the death of Bal Thackeray on 17 November 2012, both the newspapers were edited by him. To honour him, his son Uddhav has named him as the "founder-editor". The chief editor of both dailies is Uddhav Thackeray and the executive editors are Sanjay Raut and Prem Shukla of Marathi and Hindi versions respectively.