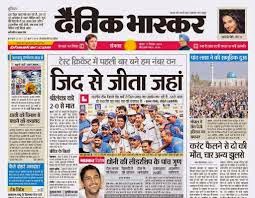 
'D.B. Corp Ltd.' is the largest Print Media Company of India with 19.8mn readership. It's a publisher of Indian Hindi-language daily newspaper Dainik Bhaskar , Gujarati-language daily newspaper Divya Bhaskar, Marathi-language daily newspaper Divya Marathi, Business Bhaskar, Saurashtra Samachar, DB Star & DNA. It was started in year 1958 from Bhopal, the capital city of Madhya Pradesh. In 1983,it commenced its ambitious journey of expansion with the launch of Dainik Bhaskar's Indore edition. It expanded its presence to 14 states with 67 editions, in 4 different languages namely Hindi, Gujarati, Marathi and English. Currently, in hindi markets under flagship newspaper "Dainik Bhaskar" it is present in 12 states with 37 editions. Beside this it is also present in Gujarat as "Divya Bhaskar"in Gujarati language with 7 editions and in Maharashtra as "Divya Marathi" in Marathi language with 7 editions. As of 2014, its National Editor is Kalpesh Yagnik who operates from Bhopal, Madhya Pradesh.

Dainik Bhaskar was first published in Bhopal and Gwalior of the central province. The newspaper was launched in year 1956 to fulfill the need for a Hindi language daily, by the name Subah Savere in Bhopal and Good Morning India in Gwalior in year 1957, it was renamed as Bhaskar Samachar In 1958, it was renamed as Dainik Bhaskar which in 2010, was the No. 1 daily newspaper in India (and No. 11 worldwide) in terms of circulation.