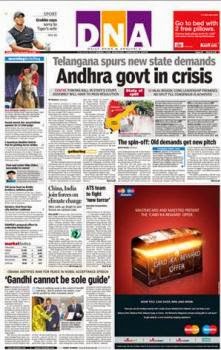 
Daily News and Analysis (DNA) is an Indian broadsheet launched in 2005 and published in English from Mumbai, Ahmedabad, Pune, Jaipur, Bangalore and Indore in India. It is the first English broadsheet daily in India to introduce an all-colour page format. It targets a young readership and is owned and managed by Diligent Media Corporation.

In October 2011, as per the Media Research Users Council's Indian Readership Survey (IRS) Round II, DNA’s total readership to be 1242,000 in Mumbai and an average per-issue readership across its six editions, of 824,000. IRS also ranked DNA as sixth among the top ten English dailies in India. DNA is the second most-read English broadsheet in the city of Mumbai.