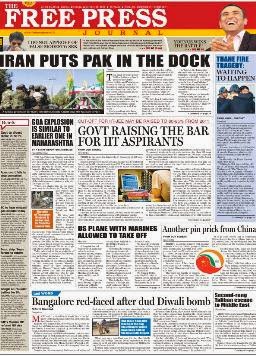 
The Free Press Journal is an Indian English-language daily newspaper that was established in 1930 by Swaminathan Sadanand, who also acted as its first editor. First produced to complement a news agency, the Free Press of India, it was a supporter of the Indian independence movement. It is published in Mumbai, India.

The founder editor was Swaminathan Sadanand.It was founded in 1930 to support Free Press of India, a news agency that dispatched "nationalist" news to its subscribers. In the colonial context, Colaco describes it as "an independent newspaper supporting nationalist causes", she quotes Lakshmi "The nationalist press marched along with the freedom fighters..." it played a significant role in mobilising sympathetic public opinion during the independence movement.

Among its founders was Stalin Srinivasan who founded Manikkodi in 1932. Bal Thackeray worked as a cartoonist for the newspaper until being removed from the job. Thackeray then founded Marmik. According to Atkins he was removed "after a political dispute over Thackeray's attacks on southern Indian immigration into Bombay" Notable cartoonist R. K. Laxman joined The Free Press Journal as a twenty-year-old. He was Thackeray's colleague. Three years into the job, he was asked by his proprietor not to make fun at communists, Laxman left and joined The Times of India.