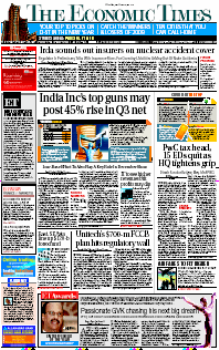 
The Economic Times is an English-language Indian daily newspaper published by the Bennett, Coleman & Co. Ltd. first published in 1961. It is the world's second-most widely read English-language business newspaper, after the Wall Street Journal. with a readership of over 800,000. The Economic is published simultaneously from 12 cities Mumbai, Bangalore, Delhi, Chennai, Kolkata, Lucknow, Hyderabad, Jaipur, Ahmedabad, Nagpur, Chandigarh, and Pune.

The Economic Times is headquartered in Mumbai at The Times of India building. Its main content is based on the Indian economy, International finance, share prices, prices of commodities as well as other matters related to finance. The founder- editor of the paper when it was launched in 1961 was P.S. Hariharan. The current Editorial Director of The Economic Times and ET Now is Rahul Joshi.
Like the London-based Financial Times, The Economic Times is printed on salmon pink paper. It is sold in all major cities in India. In June 2009, it also launched a television channel called ET Now.
The Economic Times Magazine on Sunday was revamped and now dons a new format, style and regular features on great personal content in 2011. The fresher edition hosts a variety of material not found during the weekdays. The special edition on all Sundays contains, namely: "what's news", "news in numbers", "behind the news", "spotlight", "cover story", "expert view", "economy", "centrespread", "travel guide", "food & drink", "recommended" and finally "feel smart". 'feel smart" generally hosts a "Cocktail Conversations" article which describes a definite difference between terms, objects, persons and abstract views which are normally considered to be the same. It also contains "Behind The Lines" which gives a brief crisis that had occurred, gives a brief overview of the crisis and the solution derived.