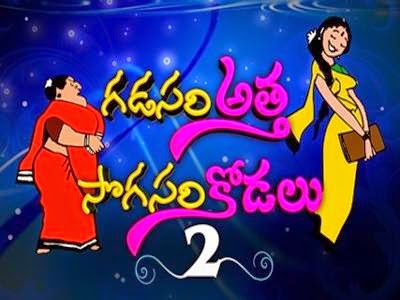 The much awaited Gadasari Atta Sogasari Kodalu 2 is back. Previous season of GASK was one of the highly successful outdoor game show in Telugu Television reaching out to Attalu and Kodallu from entire length and breadth of Andhra Pradesh.
Gadasari Atta Sogasari Kodalu 2 is an outdoor game show, having contestants of Atta (mother-in-laws) and Kodalu (daughter-in-laws) as pairs competing with another pair, playing their childhood games and many more to win the title.
In this unique fun game show, both Atta and Kodalu play together to win over the other pair in their town / village.
Auditions for Atta-Kodalu Pairs and actual program is being conducted outdoor across AP at the door steps in their very own town.