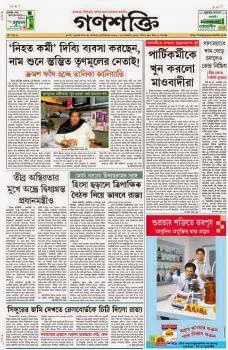 
Ganashakti Patrika is an Indian Bengali daily newspaper published from Kolkata, West Bengal, India. The paper is an organ of the Communist Party of India (Marxist) West Bengal State Committee. It first appeared as a fortnightly in 1967 and then it started as an evening daily for quite some time and finally converted into a full-fledged daily newspaper. Presently Ganashakti has 3 editions in Kolkata, Durgapur and Siliguri having a daily circulation of 2,30,000.

The principal catalyst behind transformation of Ganashakti was Saroj Mukherjee, a freedom fighter and CPI(M)'s state secretary during the 1980s. After Mukherjee's death his efforts were carried on by Anil Biswas, who was editor of the daily.