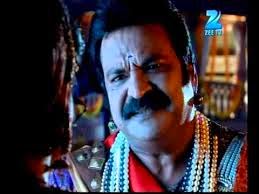 Akbar is attacked by Abul Mali. Abul Mali almost kills Akbar but the coin given by Jodha saves Akbar's life. Akbar takes the chance and blinds Abul Mali by gauging his eyes out. He lets Abul Mali go as he is his brother-in-law. Meanwhile though still angry with Akbar, Jodha praysfor his well being. Jodha is distressed and is not able stop herself from thinking about Akbar. Akbar's life is saved and he insists on meeting Jodha. Since Jodha is badly injured his father-in-laws soldiers take him to his palace. Meanwhile Jodha keeps hallucinating about Akbar. She sees him in her room and thinks that she is hallucinating. Jodha is surprised to see Akbar but refuses to talk to him. Jodha's father reprimands her for her behaviour.