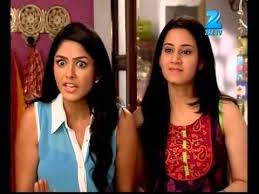 Bulbal has applied for a job with Khanna Exports. Purabh Khanna calls Bulbul and calls her for an interview. Bulbul sees a girl shouting at Purabh and him shouting back at her. Bulbul thinks of Purabh as a rude man. Suresh buys a ring to propose Bulbul. Bulbul sees Suresh with the ring and thinks that he is going to propose Pragya. Suresh shows the ring to Pragya, she thinks it is beautiful. Just then Bulbul comes forward and Suresh points at her and says that he got the ring for her. Everyone think since he got scare he pointed at Bulbul. The family tries to bring Suresh and Pragya close.

Kumkum Bhagya' is its Indian interpretation, following the life of a Punjabi matriarch Sarla Arora who runs a marriage hall and lives with the hope of seeing her two daughters Pragya and Bulbul who're poles apart, happily married some day! Known for making shows that are women-centric, the pivotal characters of this new show are a bunch of strong, feisty women, living together in an all-female, matriarchal family.
Watch Latest Episode of "Kumkum Bhagya".