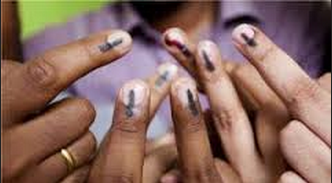 People of Andhra Pradesh will be deciding their own fate - vis-a-vis the new state when they vote to elect 25 members of Lok Sabha and 175 of the Assembly tomorrow.

Over 3.67 crore voters get to exercise their franchise to choose their representatives from among 333 candidates in fray for Lok Sabha and 2241 for Assembly.

The elections are critical for the state, which gets formally truncated on June 2, as much as for the main political parties that are engaged in a no-holds-barred fight to clinch power with the promise of re-writing the fortunes of everyone.

The stakes are very high as these elections are a do-or-die battle for Telugu Desam Party and possibly a now-or-never chance for Yuvajana Sramika Rythu Congress (YSRC).

That the Congress, which ruled the state since 2004, is not even being counted as a contender in the elections is probably the biggest irony.

Though a new political player has emerged in the form of Jai Samaikyaandhra Party, it could end up only as an "also ran" with no relevance whatsoever.

Having been relegated to the opposition for ten years, after being in power for a nine-and-a-half-year period preceding that, the TDP is now surely battling for its political existence.

Having been set up with the sole objective of seizing power, the YSRC ostensibly cannot afford to miss the occasion now. The strong anti-corruption sentiment among people is coming to haunt the YSRC as its chief Y S Jaganmohan Reddy and many of its leaders are facing massive charges of corruption.

Post-bifurcation, TDP president N Chandrababu Naidu is being looked upon as the only leader who could "undo the injustice" and ensure rapid development of the residual state, given his experience as the Chief Minister earlier.

A lot of water has flown in the state politics in the last couple of years, more so in the last nine months, where the YSRC has lost much of its steam.

The TDP, on the other hand, saw a revival in its fortunes particularly in the last one year and its realignment with the Bharatiya Janata Party only brightened its prospects, at the cost of the YSRC.

The TDP is confident that the "Modi wave" will work to its advantage even in the Assembly election.

The "anti-corruption" mood prevalent among the public in the last couple of years has obviously dampened, if not completely damaged, Jagan and his YSRC's prospects.

Jagan's loss was TDP's gain as it emerged as the only viable alternative to the Congress. However, Elections-2014 will be "forgettable" for the Congress as it is hit strongly not only by anti-incumbency but also by the state's bifurcation.

The Congress became the chief villain in the bifurcation saga and consequently stood on the verge of extinction in Seemaandhra.

Caste always played a notable role in electoral politics in AP but the perceived "polarization" actually did not happen.

The YSRC, which was supposed to be the biggest gainer of the caste matrix, might suffer a dent as certain caste and religious groups moved away from it.

The TDP is banking mainly on the backward classes, apart from its traditional support groups (Kamma) besides the Kapus.

By joining hands with the BJP, the TDP may have to forgo the Muslim votes but it is not so perturbed as it feels many other factors, including the "Modi wave", will otherwise help it.
Andhra Pradesh Votes Tomorrow for 25 Lok Sabha 175 Assembly Seats
Thanks for Visiting womenspage.in