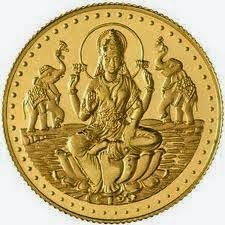 The average Indian doesn't really need an excuse to buy gold but making it an auspicious ritual gives the act a certain moral sanction, if such a thing was indeed needed. That's why the faithful will be lining up happily to pick up the odd coin or two this Akshaya Tritiya, which falls on Friday.

But stick to that limit and don't splash out too much on the yellow stuff is the rather sobering advice given by investment experts. That's in sharp contrast with what gold fans have been told in past years when returns on the yellow metal outstripped various other asset classes. Financial experts used to suggest people to buy more gold than what was dictated by their beliefs through exchange-traded funds (ETFs) and mutual fund savings plans to get better returns. 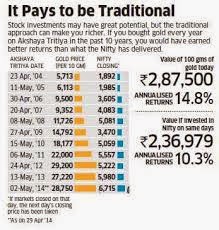 But the shine seems to have dulled, given the current state of the market.

"Since Akshaya Tritiya is an auspicious occasion, people can consider making some gold purchases. (But) I won't recommend investing in gold at the moment," said Priti Gupta, executive director, commodities and currencies, Anand Rathi Financial Services. She expects gold prices to hover around Rs 29,000-29,500 per 10 gm in the next two months, down from a high of Rs 31,000 in March. That's in contrast with returns from a year ago. Gold that was bought on Akshaya Tritiya last year has appreciated 11.73

Gold has lost its charm as a safe haven in India due to extreme volatility and the artificial elevation of prices due to the import duty of 10% imposed by the government last year to rein in the current account deficit. Some experts are ambivalent about gold as an investment right now because of the ongoing election, although the equity markets have surged on expectations that the Narendra Modi-led Bharatiya Janata Party will be well placed to form the next government.

"The outlook is bearish for gold. Internationally, there are no triggers for an upside. The US economy seems to be on course to stability, the dollar is strengthening and there are no major geopolitical risks in sight, except for the Ukraine crisis. Central banks, too, are selling gold," said Naveen Mathur, associate director, commodities and currencies, Angel Broking. Of course, that's not to say this scenario couldn't change suddenly. For instance, data on Wednesday showed that the US economy barely grew in the quarter to March.


The current domestic bearishness may persist.

"The rupee might appreciate (further) if a stable government comes to power. There is also a possibility of rationalising the 10% import duty," Mathur said.

If you are still going ahead with gold purchases this year, keep in mind the pitfalls of buying coins and gold bars from jewellers and banks. For one, you will have to incur storage expenses. Two, buying coins and bars from banks comes with a handicap you cannot sell them back to the banks.