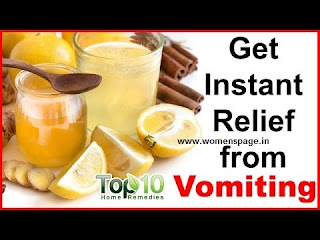 Vomiting is a symptom of underlying disease and not a specific disease. It is an act of forcible of emptying the stomach contents. The stomach has to overcome the pressures that are normally in place to keep food and secretions within the stomach. During a vomiting episode, the stomach turns itself 'inside out' - forcing itself into the lower portion of the esophagus.

The signal to vomit can be stimulated by smells, taste, various illnesses and emotions (such as fear), pain, injury, food irritation, dizziness, motion, and other changes in the body:

Infections: This is often the cause, whether it is a common virus or an infection that is contracted from travel. May be associated with crampy upper abdominal pain, fever and chills. Common viral infections include rotavirus. Parasitic infections often are associated with diarrhea but may also have a component of nausea and vomiting. Bacteria such as H. Pylori can be the infectious agent.

Stomach flu: Is a non-specific term used to describe vomiting and diarrhea associated with a viral infection.

Food poisoning: May cause significant vomiting and usually is caused by a bacterial toxin. Symptoms begin within a couple hours of eating contaminated or poorly prepared food and may last for 1-2 days. Sources of food poisoning include Salmonella, Campylobacter, Shigella, E coli, Listeria, or Clostridium botulinum.

Other causes include:
Eating disorders (anorexia and bulimia)
Motion sickness (car sickness, seasickness)
Vertigo (the sensation that the room is spinning around)
Head injuries (such as a concussion or bleeding injury)
Gallbladder disease or appendicitis
Migraine
Brain tumors
Brain infections such as meningitis
Hydrocephalus (too much fluid in the brain)
Pyloric obstruction, a condition that causes forceful spitting up in infants)
Infection or irritation of the intestines
Low or high body chemicals and minerals as well as toxins in the body
Alcohol from beer, wine, and liquor which causes nausea and vomiting
Early pregnancy - morning sickness usually happens in the first few months


If the vomiting is so bad that the person cannot keep any liquids down for more than 8-10 hours.
Vomiting blood is a warning sign. Blood may be bright red or dark red. Sometimes old blood can look brown like coffee grounds.
If you are taking care of a child, see the doctor if the child does not pass urine in 6-8 hours (or has dry diapers for that period of time).
The patient shows signs and symptoms of severe loss of body fluids (dehydration) which include dry mouth and lips, less urine than normal, dark yellow and smelly urine, and severe thirst. Symptoms such as weakness, dizziness, lightheadedness are worse when standing.
Go to the Emergency Department if:
the patient is experiencing nausea or vomiting with severe stomach pains.
vomiting with fever especially in a child.
you see blood in the vomit.
vomiting does not stop and the patient is unable to keep down any fluids.
the patient has a known head injury.
there is other medical conditions present such as heart disease or diabetes.
you observe any signs of confusion or extreme weakness.
a new or severe headache is also present


Home Remedies :
Take medication as directed. Medicine usually involves those that help to decrease nausea and vomiting.
Avoid excessive motion, strong smells, and anxiety-producing situations.
Drink plenty of water, if the person can retain well, to prevent dehydration from fluid loss. Fluid intake helps correct electrolyte imbalance, which may stop vomiting:
Start with small amounts.
Only use clear liquids (such as clear soup, barley drink).
Avoid milk and any dairy products as they can make the nausea and vomiting worse.
Work your way up to soft foods such as porridge, oatmeal and go back to liquids if the nausea and vomiting return.
If the person cannot retain fluid, gives small amounts. Provides ice chips repeatedly.
After 24 hours of fluid diet without vomiting, begin a soft-bland solid diet such as the porridge, bananas, toast, noodles and potatoes.
Children should be given oral rehydration solutions such as Pedialyte. Fruit juice and sports drinks will not correctly replace fluid or electrolytes lost from vomiting. Using plain water will not replace electrolytes and may dilute electrolytes to the point of seizures.

Ayurvedic Tip for Vomiting:Eating a pinch of Ajwain powder and a pinch of clove powder which is mixed with honey helps people who are suffering from this problem.