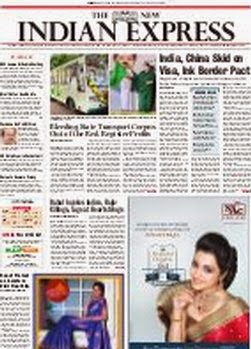 In 1931, the Indian Express was started by an Ayurvedic doctor, Perumal Varadarajulu Naidu, at Chennai (then known as Madras), being published by his “Tamil Nadu” press. Soon under financial difficulties, he sold the newspaper to Swaminathan Sadanand, the founder of The Free Press Journal, a national news agency. In 1933 The Indian Express opened its second office in Madurai, launching the Tamil edition, Dinamani. Sadanand introduced several innovations and reduced the price of the newspaper. Faced with financial difficulties, he sold a part of his stake to Ramanath Goenka as convertible debentures. In 1935, when The Free Press Journal finally collapsed, and after a long and controversial court battle with Goenka, (where blows were exchanged between some of the parties), Sadanand lost ownership of Indian Express.

The first managing agent was Messers Sadanand and Company with headquarters in Bombay, with Sadanand as the sole proprietor.

A year later Goenka, bought the remaining 26% of the company held by Sadanand. The newspaper then came under Goenka's sole control, taking the already anti-establishment tone of the paper to greater heights. Also at that time, it faced stiff competition from the well established The Hindu and the Mail, as well as several other prominent newspapers. In the late 1930s the newspaper's circulation was no more than 2000.

In 1939 Goenka bought Andhra Prabha, another prominent Telugu daily newspaper. The name Three Musketeers was often used for the three dailies. In 1940 the whole premises was gutted by fire. The Hindu, a rival newspaper, helped considerably in re-launching the paper, by getting it printed temporarily at one of its Swadesimithran’s press and later offering its recently vacated premises at 2, Mount Road, which became the landmark Express Estates. This relocation also helped the Express obtain better high speed printing machines. Some claimed the Goenka had deliberately set fire to escape financial embarrassment.

In later years Goenka started the Mumbai edition with the landmark Express Towers as his office when he bought the Morning Standard in 1944. Two years later it became the Mumbai edition of The Indian Express. Later, editions were started in several cities; the Madurai edition in 1957, the Bangalore edition in 1965, and the Ahmedabad edition in 1968. The Financial Express was launched in 1961 at Mumbai, Kannada Prabha (Kannada Daily) at Bangalore in 1965 and a Bangalore edition of the Telugu Daily Andhra Prabha, and Gujarati dailies Lok Satta and Jansatta, from Ahmedabad and Baroda in 1952.

The Delhi edition started was when the Tej group's Indian News Chronicle was acquired in 1951, which in 1953 became the Delhi edition of Indian Express. In 1990 the group bought the Sterling group of magazines, along with it the Gentleman magazine.

After Ramanath Goenka’s demise in 1991, two of the family members split the group into Indian Express Mumbai with all the North Indian editions, while the Southern editions were grouped as Express Madurai Ltd. with Chennai as headquarters.
Indian Express Epaper Indian Epaper
Thanks for Visiting womenspage.in